Thoughts on the Apple MacBook 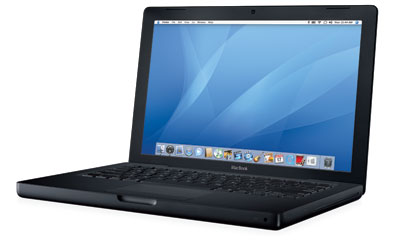 After dropping off an eMac for repair, I paid a visit to the First Tech showroom in Minneapolis to take a test drive of the new MacBook laptops. The black model is visually very striking and in my opinion, much better looking than the white version (which looks just like the old iBook casing). I spent most of my time on the black demo unit, which had the stock 512MB of RAM and the 2.0GHz dual core Intel processor.

There were four things I wanted to check out in person: 1) the keyboard, 2) the glossy screen, 3) the speed of the integrated graphics and 4) the overall size and weight.

The keyboard has a nice looking design, but how is it as an actual typing surface? At first, I thought the keys were spaced too far apart, but this is really just an optical illusion. It definitely has a feeling unique from other Apple laptops, but I think I would adjust to it after an hour or so. The recessed keys also prevent the screen smudging that occurs on all of the PowerBooks I’ve used.

I’ve always hated the glossy screens on Wintel laptops at Best Buy and was disappointed that Apple was only offering screen options on the Pro models. After seeing the MacBook glossy screen in action, though, I quickly learned to block out the minimal glare that was present. I think I’m just used to doing that with shiny television screens and this screen is too small to get really annoyed with it. In fact, that’s really the only thing that would prevent me from considering one of these for myself–I’m spoiled with the 1680×1050 resolution of my 17-inch PowerBook. With ExposÃ©, however, I could probably get by with the upgraded 1280×800 resolution in exchange for a machine that actually fits on an airplane tray.

There is a certain stigma associated with integrated graphics that began because systems that had this were usually bargain basement PCs. Apple describes theirs as “Intel GMA 950 graphics processor with 64MB of DDR2 SDRAM shared with main memory.” The reviews and feedback I had read were a little mixed–most said it wasn’t like the old systems, but it still wasn’t good enough to run the highest-end games and applications. I’m still curious to know how much of a difference going from the base 512MB of RAM to the maximum 2GB makes, but the stock machine at First Tech did very well with the tests I threw at it.

First, I opened iPhoto and did a scroll and resize test, which it performed faster than my PowerBook (although with a much smaller library). Then I launched a slideshow using the cube transition effect and it was very, very smooth. Finally, I turned on the iTunes visualizer and watched the frame rate–30 frames per second versus about 21 on my current machine. If it does this well with 512MB, I imagine a MacBook with 2GB of RAM could do just about anything I want or need.

The overall styling of the black model is awesome. The fit and finish were solid and the magnetic latch is better than people have said–you really need to see it in person to appreciate how well-designed they are. The MacBooks are noticeably thinner than the iBooks and reminded me of the 17-inch PowerBook thickness. They are a little wider than the iBooks, but the trade-off in screen resolution (and the widescreen aspect ratio) is well worth it. At 5.2 pounds, they’re not too heavy for typical laptop transportation needs and felt pretty light when I picked it up. The demo unit also wasn’t very hot (at least as far as I could tell). The speakers weren’t loud at all, but I’ve found that to be the case on most Apple laptops. The reflection of the speakers off of the screen is very clever.

At $1499, you are paying a $150 premium just to get black, but I did not feel like the white model was as well built. The additional of a user-installable hard drive is one of the biggest improvements Apple could have made to a laptop design and is much appreciated (I can finally forget about microscopic Torx screws). My wife is applying for graduate school and this machine would make an ideal student laptop. In fact, I can’t think of many people who would really need a MacBook Pro over a black MacBook.

For more detailed reviews, I recommend those found at Ars Technica and Macworld…DK