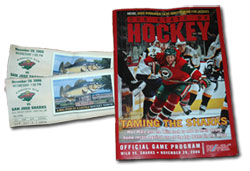 Wow, was that an unsatisfying game! Manny plays solid, the Wild get a goal from the line of Weinhandl-Foy-Smith (!) and they still lose 2-1 to a San Jose team that didn’t really look like much of a powerhouse. Joe Freakin’ Thornton seemed sluggish and Borat’s friend Nabokov was hardly challenged in net (only 9 shots in the first two periods).

It was painful to hear the list of Wild player scratches before the game: Gaborik, Demitra, Boogaard, Walz, Morgan. Our Buffalo Wild Wings friend Kurtis Foster got hit in the neck by a puck while sitting on the bench and didn’t return, so I suppose a 2-1 loss wasn’t that bad, all things considered.

The officiating in the games I’ve attended this year has been awful. In the last two games I watched, the opposing team went through the first two periods with no calls against them. Now I’ve never played hockey myself and maybe I don’t know the rules to the letter, but there are four professional referees on the ice that are supposed to be watching the same areas of the ice that fans do (primarily around the puck). How can you not see obvious stick-holding and interference that may be a great pick in basketball, but I’m pretty sure is illegal in hockey. Overall I like the “new NHL” style of play and associated rule changes, but you have to make consistent calls on both teams.

Next set of tickets: Tuesday night versus the Blackhawks…DK