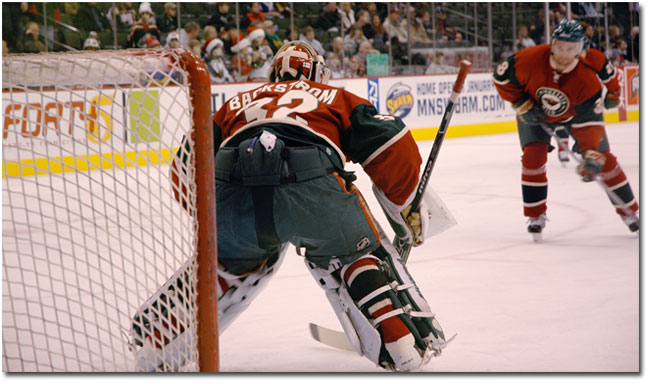 We arrived early for the game last night and brought along the Nikon to attempt some shots of the pre-game practice. I have a new appreciation for the Sports Illustrated-caliber photographers and need to read up on the techniques they use to get those great action shots indoors under artificial lighting. I took almost 500 shots and I’ve uploaded the best ones here.

As for the game, I was initially disappointed, as the Dominator had the night off (and didn’t even travel to Minnesota). On top of that, one of the refs was Mr. Magoo. If the Wild lost in addition to those things, it would have been a total waste of hard-earned money (this was an extra game I purchased). Thankfully, things turned out OK.

The first goal of the night was totally unexpected–a short-handed feed from Dupuis to Koivu. If Dupuis keeps this up, we’ll have to stop calling him Dufus. The two Detroit goals were even more painful due to the small, but vocal group of Detroit fans in attendance. Both were good goals that weren’t really Manny’s fault (more defensive breakdowns than goaltending). The Parrish tip-in to tie the game with so little time left in the third was a nice surprise and caused the X to explode (take THAT Detroit fans). PMB’s break-away in the OT sealed the deal and sent us home happy.

Next scheduled game for me: January 16 versus Rollie the Goalie and the Edmonton Oilers…DK