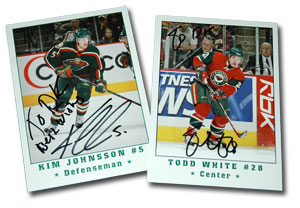 Last night my daughter and I went to see Kim Johnsson and Todd White of the Minnesota Wild at Hockey Unplugged. This edition was held at Joe Senser’s in Bloomington and was well attended by the Wild faithful. This is the second Hockey Unplugged event we’ve seen and continues the great community relations tradition of the Wild. Johnsson was especially friendly and I have two more “To DK” photos to add to the wall in the office.

The next Hockey Unplugged is close to home in Lakeville (players TBA), so we’ll probably hit that one as well. Stephane Veilleux is also scheduled to make an appearance near our office on January 17.

My officemate Jake and I scored free tickets to tonight’s game against Tampa Bay. Sounds like Gaborik won’t be back tonight as I had hoped, but if they play half the game they did against Atlanta, it should be a blast. Great seats too–row 20, section 118. Thanks Alan!