Off to Visit the Mouse 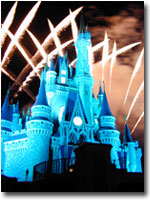 We leave today to visit my brother and his wife in Orlando, Florida for a few days. The timing is great–it’s forecast to be the coldest week of the year in Minnesota. Orlando hasn’t been the warmest lately (lows near freezing), but it’s supposed to get back to normal by the end of the week.

I’m especially excited to ride the new Expedition Everest ride at Animal Kingdom. No golf planned, but I’m sure we’ll do a lot of walking the next few days. Watch for pictures and stories later this week…