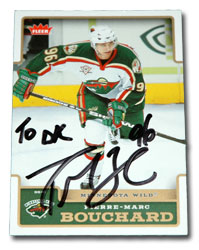 Today we battled the freezing rain and snow to see if there really was a player appearance by the Wild’s Pierre-Marc Bouchard at a car dealership near our house. I heard about it during the last TV broadcast, but it wasn’t listed on wild.com and I wasn’t sure he’d be there.

We pulled into the dealership (after passing several cars in the ditch and one 3-car accident) and saw some green, gold and red balloons inside. There were about 30 people waiting, but the table was empty. About ten minutes after the scheduled starting time, PMB arrived in a nice Range Rover and started signing shortly after that.

Mr. Bouchard was extremely friendly to everyone and seemed like a truly nice guy. At a reported five foot nine, 162 pounds, a lot of people seemed surprised by his size. I’ve posted a few pictures in the private photos section of PMB and my daughter, who had her jersey signed. They were using different 5×7 photos today, so I elected to have him sign a “To DK” hockey card instead.

Tomorrow we will fight the snow for a home game against the Edmonton Oilers and Rollie the Goalie.