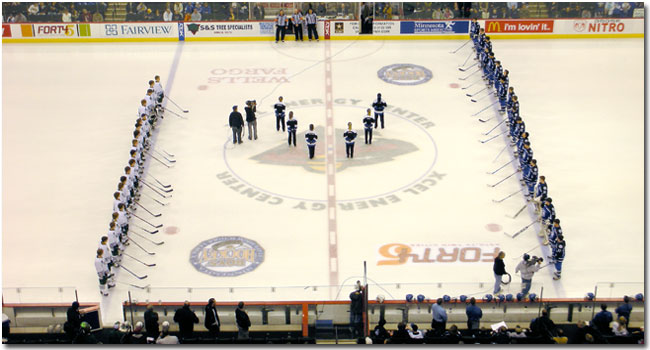 Roseau about to take down Woodbury

Today was quarterfinal day for Class AA boys hockey at the Minnesota State High School League tournament in St. Paul. We bought a ticket package this year to thank clients and get prepared for the new hockey.mn site. The seats were very nice: upper level, row two, center ice.

The first session had two games: Roseau vs. Woodbury and Hill-Murray vs. Rochester Century. I thought the Woodbury students in the stands were very rude (booing the Roseau players as they were being introduced) and I was glad to see them get spanked, 7-2. This was Roseau’s 31st appearance at state–show no respect, lose big.

The second game was great. The private Catholic school Hill-Murray is always a powerhouse, but Rochester played them tough and had the best 3-on-2 goal I’ve seen in a long time (behind the back, centering pass, goal). The chants during that game made me smile:

Despite being more than twice as old as all of them, I didn’t feel as old this year as in past years. Lots and lots of youthful excitement and school spirit. Nothing else like it…

Speaking of youth, my oldest daughter wrote me a hockey poem tonight:

I have the puck
I’m skating down, down, down
Soon the goalie sees me, I see him
My stick goes up –
and BAM!
Soon the puck is in the net.
Shootout