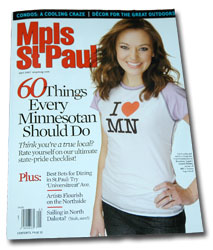 The current issue of Mpls St Paul magazine has a special advertising section produced in association with the MGA. Usually these sections are just a cover for a bunch of ads, but the 2007 edition has some good stories.

Jon Roe writes about Adam Riddering, a Nationwide Tour golfer from Maple Grove. John Mugford has a story about golf mentor programs, such Braemar’s Tee It Up program and the those offered by the Minnesota Metro Chapter of the Executive Women’s Golf Association. A brief, two-page metro area course guide was also included.

My favorite story, however, was written by Joe Bissen, who interviews eight people associated with Minnesota golf to ask how they define golf bliss in our state (frequent answers: Minneapolis Golf Club, Minikahda and Windsong Farm). The eight respondents are:

This special advertising section does not appear to be online.