Tony Dungy at the University of Minnesota 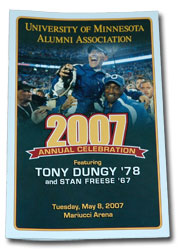 Last night I attended the University of Minnesota Alumni Association’s annual gala, held on campus at Mariucci Arena. The speakers were Stan Freese ’67 and Tony Dungy ’78.

While Mr. Freese has had a distinguished musical career with Disney, most of the people were there to hear the coach. While some of his past comments have caused controversy, last night’s talk was completely free of anything remotely controversial (almost to the point of being boring). There were some protesters outside beforehand, but there turned out to be little to protest in his public speech.

I am an alumni of the University, but I’m not currently a member of the alumni association. That mostly has to do with my belief that I shouldn’t have to donate money to the school until my mountains of student loans are paid off. I felt a little bit of school pride at the event, but mostly it just seemed hokey–like some bizarre club that makes you feel awkward for being a member.

I’d much rather be in that arena for a Gophers hockey game than an alumni event. Which I guess goes to show that I shouldn’t be opposed to the vast amounts of money spent on athletics. President Bruininks did say he wants the U to be one of the top three public research universities in the world also, so I guess it’s all good…