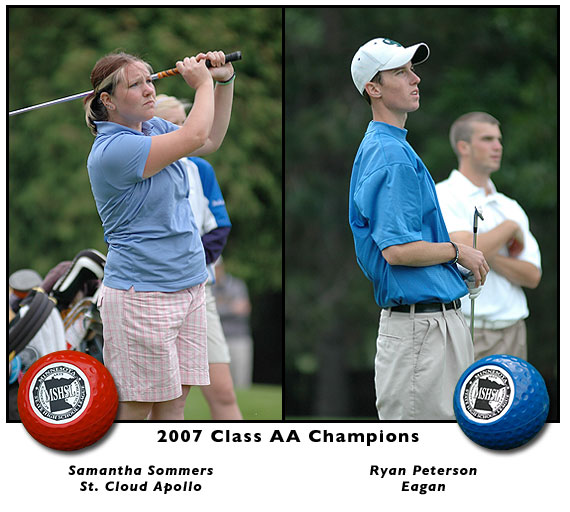 Samantha Sommers followed up her first round 70 with a 77, but that was easily enough to win the girls individual AA title today at Bunker Hills Golf Course in Coon Rapids. Same story for Eagan senior Ryan Peterson, whose 67-73-140 (-4) was three better than Minnetonka senior Donald Constable.

In the team competition, the Burnsville girls team was able to hold on to their first round lead, shooting 345-344-689 to win by 13 shots over second-place Alexandria.

The Eagan boys team wasn’t as lucky, adding 21 strokes to their day one leading total and dropped to fifth place today. Minnetonka shot 300-305-605 to win by six shots over Forest Lake.

Photos will be added to the tournament section of the photo gallery later this week.

Our coverage of the Class A tournament at Izatys may be cancelled due to weather. Stay tuned…