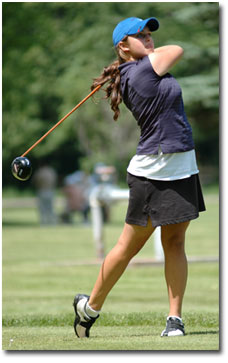 Her dad Tom was following her group today and said she was a little nervous the first day, shooting a 98 in the rough, windy weather.

Natalie really turned things around today, though, firing an 83 that put her in a tie for 26th place. That was one shot better than the 84 she shot to qualify for state during the sectionals held at Goodrich Golf Course.

Also a basketball and soccer player, maybe now golf will take center stage. It does run in the family–Natalie’s sister Olivia also learned under McCullagh and now plays for Drake University in Iowa.