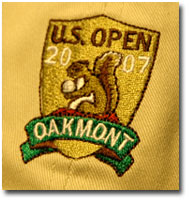 31-year-old Detroit Lakes resident Michael Berg was scheduled to play in his first ever Tapemark Charity Pro-Am this weekend. He shot a 73 in the May qualifier at Southview, but had to withdraw after earning one of the 156 spots in next week’s U.S. Open at Oakmont Country Club.

Four years ago, Berg won a 4-for-1 playoff at Mendakota Country Club against Greg Peterson, Jim Lehman and J.T. Johnson by birdieing the first hole to earn a spot in the 2003 U.S. Amateur at Oakmont.

When I talked to him yesterday, Berg was packing up the car for his return to Oakmont. He said the USGA was testing the best ams then to see what changes needed to be made to the course before the U.S. Open. The rough was the deepest, most penalizing he had ever seen and he noted nothing could have prepared him for what he saw.

“The fairways were faster than most greens in the Midwest, stimping at about a 9–with greens around a 15.”

In 2003, he started his round with a triple bogey, double bogey, bogey en route to a 13-over 83. It will be fun to watch how he does in his return to the fabled Pennsylvania course.