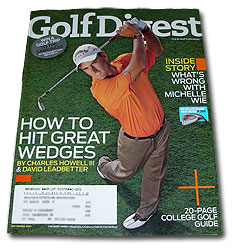 The September 2007 issue of Golf Digest magazine has a 20-page college golf guide section that has a picture of Gopher golfer Victor Almstrom at the NCAA Championship on the first page of the article.

They rank schools several ways (golf first, balanced and academics first), which are described on this page.

No Minnesota schools appeared in the men’s top 50 “golf first” rankings (Northwestern was the only Big Ten school at number 24). The Gopher men’s team was ranked 57th in that classification.

On the women’s side, Minnesota division III schools did very well, with Carleton ranked 5th, Gustavus Adolphus 10th and Saint Thomas 15th in the “balanced” category.