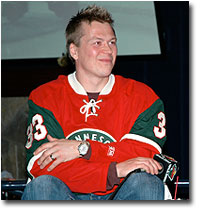 The first change to the Wild roster for next year is official: Mike Russo reports the Troll is headed to Switzerland.

I felt bad for him during his Wild tenure, as he seemed to wear out by the end of the 2006-2007 season and spent a lot of the past season in the press box, despite other injuries and weaknesses both on the blue line and up front.

Last year my daughter and I went to see him with Koivu at one of the player appearances and he was just the nicest guy.