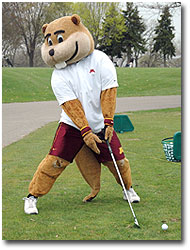 After being named to the 2008 men’s golf All-Big Ten First Team, Gophers senior Clayton Rask and junior Victor Almstrom were selected to compete as individuals in this week’s 2008 NCAA Central Regional at the Ohio State University’s Scarlet Course.

They will compete for two spots awarded to individuals not affiliated with an advancing team for the 111th Annual NCAA Division I Men’s Golf Championship, which will be held May 28-31, 2008, at the Birck Boilermaker Golf Complex (Kampen Course) in West Lafayette, Indiana.

The Gopher men’s team failed to qualify for the regional after finishing second to Michigan State in the 2008 Big Ten Championships in East Lansing, Michigan.

The NCAA implemented a new rule this year that requires teams receiving at-large bids to have a .500 winning percentage or higher. The Gophers played the 17th strongest schedule in the country and finished with a 51-94-1 overall season record in 11 events.

This is the first time in fifteen years that the Gopher men’s team will not be playing in the NCAA post-season.