Golfweek Best Courses You Can Play 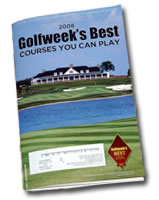 Golfweek sent out a special advertising supplement this week that lists their top courses you can play in each state, along with a section of ads from those courses that elected to place an advertisement.

For Minnesota, two courses purchased half page placements: Giants Ridge in Biwabik (which used sort of a strange picture of the 18th fairway on the Quarry course) and The Classic at Madden’s on Gull Lake.

The top 10 public course list for Minnesota was the same that we mentioned in our March 10, 2008 post Golfweek Top Courses Issue. They even corrected the typo on the Madden’s entry:

The season may be short, but golfers in the Twin Cities are spoiled for choice once summer arrives. In the Brainerd Lakes region to the north can be found Deacon’s Lodge (No. 2), The Classic at Madden’s on Gull Lake (No. 7) and The Preserve at Grand View Lodge (No. 9). Fifteen miles from Minneapolis/St. Paul in Prior Lake is the Legends Club (No. 6) and The Wilds (No. 8), the latter a superb Tom Weiskopf-Jay Morrish design.

I love reading how the national media portrays golf in Minnesota. In my opinion, though, it doesn’t happen nearly often enough…