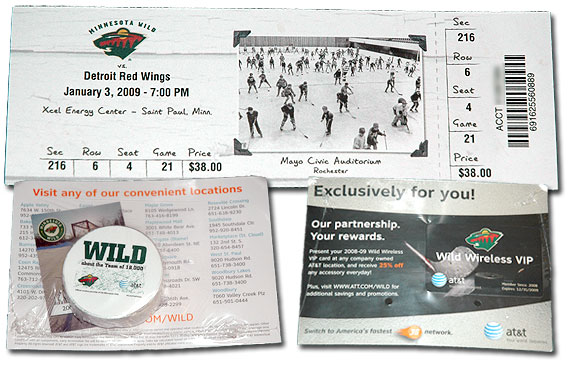 Attending tonight’s Wild-Red Wings game at the X was sort of a last minute decision for me. My aunt got fed up with the team after the Chicago game and wanted to boycott, so I filled in for her in section 216.

The first period was a return to the bad trends of December: Detroit scored the first goal and the Wild got shut out. Shots stayed closer than I expected, though (11-8 Wings), and it was refreshing to have zero penalties on either team. I didn’t see Samuelsson’s goal very well, as it was at the other end, but I did see my buddy Skoula standing over Josh after it went in.

It was still 1-0 Detroit at the end of two, but the Wild ended the period with a 5-on-3 that carried over to the third. Somehow they also managed to out shoot the Wings in the second 16-8, although it really didn’t seem like it to me.

The third period started off with a bang, with new assistant captain Owen Nolan deflecting a Brent Burns blast from the blue line, quickly followed by a quick wrist shot by Antti Miettinen 16 seconds later. It was the aggressive play of Cal Clutterbuck that created the second goal, giving Clutter-butter his first assist of the year. Slim night for Cal on hits, though – only 3.

I have yet to see the disputed Franzen goal on replay. That goal was also at the other end of the arena from us, so I couldn’t really see anything. The ref that was standing right there with the perfect angle immediately waved it off and play was about to begin when Toronto decided to study the issue further. I’ll withhold further opinion until I see what the war room saw. Falness said on the post-game that he thought it was the right call…

I do have to say that the appeal of the shoot-out has faded for me. I now agree with those that say it’s a tricked up skills exhibition that awards an extra point instead of “real” hockey. One part of me wants a return of ties with no extra point, while another part of me wants to have them play until someone wins, like in the playoffs. Four-on-four, three-on-three, I don’t care – make them work for the extra point for real. They are professional athletes that get paid a lot of money – let’s see the show.

Not much else to report from the arena experience tonight. AT&T was handing out those packs pictured above, although I’m still not sure what’s in there. The Wild also had tables set up to hand out the mugs that didn’t arrive in time from one of the December games. I’m guessing they will have a bunch of those left over, as you needed a voucher and I’m sure a lot of those got lost.

The Wild travel to Denver to play the Avs tomorrow at Pepsi Center (7PM, FS North HD). I’ll be curious to see who starts and how well they bounce back from this game. Jacques said they would get pillows for the guys with big ice time (Burns – 33:33, Johnsson – 30:18, Skoula – 27:55). At least Colorado is dealing with some of the same issues we have right now (key injuries, on the outside, looking in, etc.).