State of the State of Hockey 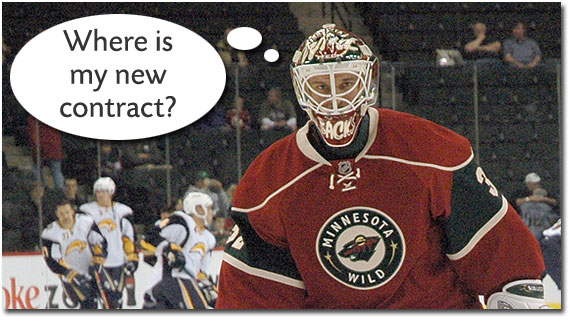 Thanks to my “real job” nightmare, I haven’t had much time to focus on this site or on hockey in general. It’s hard to miss the general state of despair of the Wild online community, though. Russo thinks the Wild are toast, Hockey Wilderness is totally pissed and threats of season ticket holder revolts are flying left and right.

Yes, the Ottawa game was a massive choke. Yes, the Wild are uber-inconsistent this season. Yes, the Wild can’t string three wins in a row to save their lives. Yes, the upcoming stretch of games against top-ranked teams will be challenging. And, yes, 14 out of 17 games on the road is a bitch.

But you know what? I’m not ready to stop watching or call for Risebrough’s head on a platter just yet. Our beloved GM’s statement that “there are only four or five good teams in the league and the rest of us are all the same” is pretty much dead on. The Wild could very well stink it up for the rest of the season, but they also have a very good chance at any of the lower half of the playoff seeds (assuming San Jose, Detroit, Calgary and Chicago are locks for #1-4).

There is plenty of time at the end of the season to call for blood, but right now I’m excited to see what this crop of players can do. Hell, I’ll even give Dougie the benefit of the doubt at the trade deadline. History has shown this time of year isn’t exactly a showcase of his negotiating skills, but Mr. Leipold won’t let mistakes go on forever, right? Maybe he can redeem himself with the Gabby and Backstrom situations after all…

It cracks me up when I read posts from places like Detroit that can always find something to complain about. As if 82 points isn’t good enough, eh?

This clever ruse about consecutive sell-outs needs to end, though. I’m 99.9% sure all of those seats aren’t sold every game. Any insider informants out there that care to spill the beans? Leave us a comment or drop me a line at dk@hockey.mn.