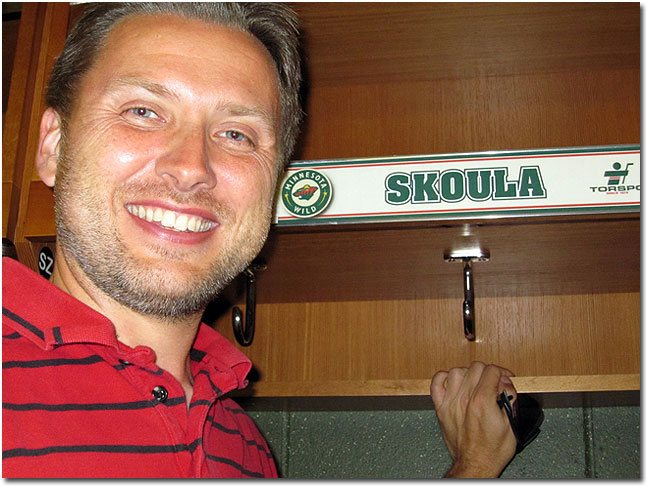 Last night we went to the 2009 edition of the Wild Select-A-Seat season ticket holder event and had a blast. I’ll write more on this over at Hockey in Minnesota soon, but I just wanted to link to the photos in the private section of the 7 Minute Miles photo gallery. 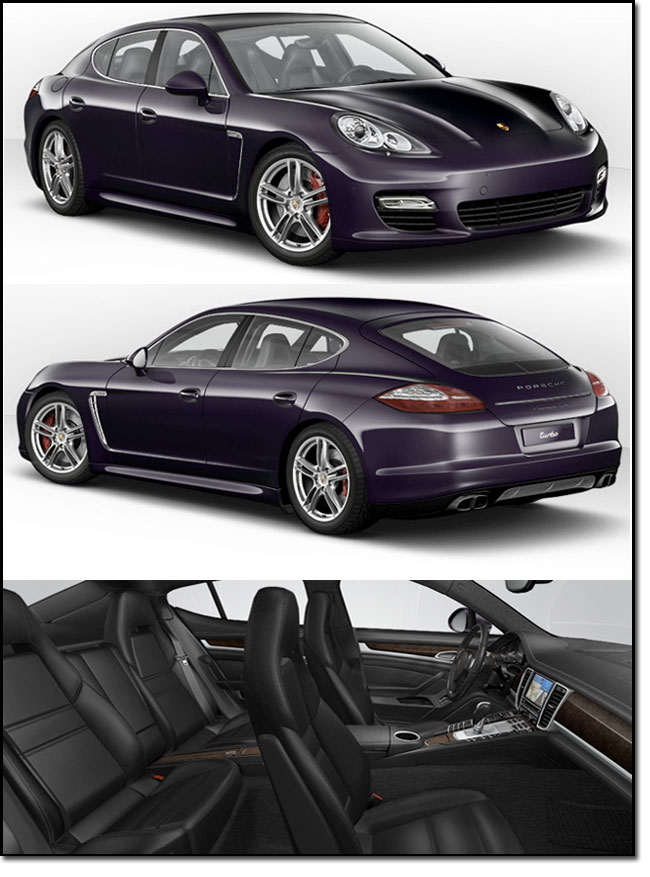 Even though most of my car friends hate it, I sort of like the new 2010 Porsche Panamera 4-door. Granted, I don’t like the looks as much as, say, an Aston Martin Rapide, but I think this would be a great Minnesota family car. The turbo version is four-wheel-drive with 500HP, a zero-60 time of 4.0 seconds flat and a top speed of 188MPH. But best of all, it comes in purple.

Now where did I leave that $135K laying around?

Remaining rounds for the Minnesota Golf Course Superintendents Association turfgrass research fundraiser are now half off. $75 per player is a great deal – 18 holes of golf with cart at some of Minnesota’s finest private courses. Visit their registration page to view the remaining availability and contact MGCSA executive director Scott Turtinen at 952-473-2582 or via email at scott@mgcsa.org to reserve your spot.

Time for a Plumber?

This started about a week after I turned on the sprinkler system. Master Sprinkler Systems said I should call their plumber (Duda Plumbing in Hopkins, 952-933-5636) with the part number. It’s a Watts Regulator, model 800M4-FR, as far as I can tell.

Anybody out there know what would cause this to happen? Do I really need a plumber?

Round 6 – Ridges at Sand Creek 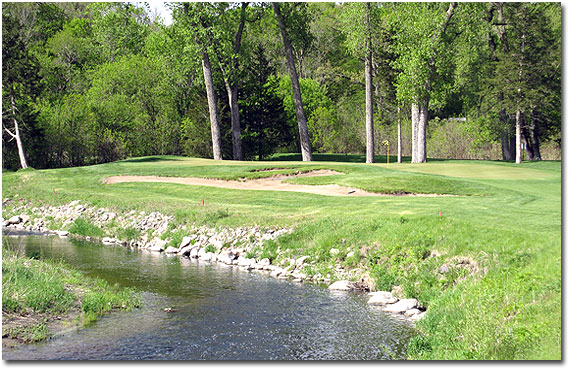 This morning we paid another visit to the Ridges at Sand Creek in Jordan. The weather was not kind (a starting temp near 40 and winds gusting to 37MPH), but that did not stop the crowds from playing this popular south metro course. We had groups all around us, but everyone seemed to move along to get out of the wind.

We’ve written before about how we love this Joel Goldstrand design, but hated that they allow five-somes to play on weekend mornings. Pace of play has been decent the past few times we’ve visited and we hadn’t seen a five-some for a long time. Unfortunately, there were a few out today. Thankfully, though, they didn’t cause a problem.

The on-course ranger slash shuttle service was very friendly and helps smooth the ascent from the river valley for walkers (the weekend walking rate was $43).

Events are designed for boys and girls 14 and under (minimum age five), using age and gender appropriate tees and single age brackets. Parents or other family members are encouraged to participate as caddies.

There is a $50 registration fee to join that covers the season of eight one-day tournaments, plus event fees of $35 for 9 holes and $45 for 18-hole players (some special events may cost more).

Tournaments will be held at the following Minnesota courses:

To register and view the schedule, visit this page. Tee times for all Local Tour events will be posted on the U.S. Kids web site two days before each tournament.

More than a thousand kids are expected for Saturday’s third annual TC Kids Marathon Cross Country Event, to be held at Como Park in St. Paul.

The event consists of a mile and half mile run which starts at 9:45AM and a new two mile run at 10:20AM. Both events are open to all children from pre-school through high school and their parents. All participants receive a T-shirt and medal, followed by a picnic lunch.

Online registration is $10 and closes today. Race day registration will begin at 8:15AM at the course and is $15.

Off site parking will be available at Como Park High School (740 West Rose Ave), with shuttle busses running every 15 minutes beginning at 8:30AM.

Crave at Mall of America

In honor of Mother’s Day, we took the family out to lunch at one of the Mall of America’s newest restaurants, Crave. This is the second location for Crave, which started in the Galleria. Our server said there is a third in the works for the west metro (likely Minnetonka).

Same day reservations via Open Table were no problem and we were seated promptly in the very busy and very full room. Unfortunately, that’s when things went downhill:

On the plus side, one manager did apologize right away for the lateness of the salad and a second (who was in a suit) asked for my opinion of the salad and described the unique method of preparation. He also offered to bring out more anchovies, which I decided against.

Another nice surprise was a presentation by our server at the end of the meal to my wife of a Mother’s Day gift consisting of a $20 spa certificate at Revamp Spa in Minneapolis and a $10 Crave gift certificate for a future visit.

The decor was also very nice and seemed like an upgrade over the previous tenant in that space, the California Cafe (which was no slouch). Lots of televisions in the crowded bar too, although I felt a little guilty watching Tiger play golf at the TPC while having Mother’s Day lunch.

We’ve had much better experiences at the Crave in the Galleria, so perhaps the new location just needs a little time to get things sorted out. Maybe we’ll try it again in a few weeks (and use that $10 certificate).

Here are the top five finishers: 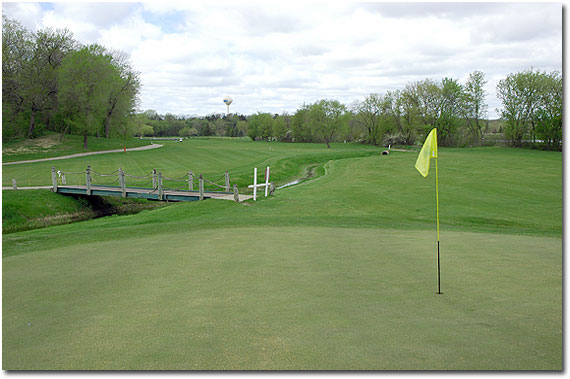 The last time I was at Eagle Trace, I was just taking photos and did not have a chance to play the course. My first impression (after shooting a 90 on the short 5,715 yard, par 70 course) is that this is one tight, brutal test of golf. It starts off easy enough with a short par four, but the 559 yard par five second hole is billed on the scorecard as “one of Minnesota’s toughest holes.”

I’d have to agree with that assessment.

Water comes in to play on 13 holes and there are numerous tight holes that border on the absurd. In fact, I thought that several holes were too gimmicky, but maybe I’d feel differently after playing the course a few more times. The second, fifth, eighth, eleventh, thirteenth and fifteenth are all holes that you need to have some local knowledge of in order to play them well. The scorecard notes help a little, but a good yardage book would be a better tool.

The day was a little cold and windy, which might have contributed to the lack of golfers on the course. Price is not an issue, though, as the weekend rate was only $27. This includes a cart, which almost seems mandatory, given the huge distance between the clubhouse and the first hole (and a few long drives between holes).

Even though many of the holes at Eagle Trace are frustrating, it is a very scenic course. Especially noteworthy are holes thirteen through fifteen, which play along side the briskly flowing Mississippi River. 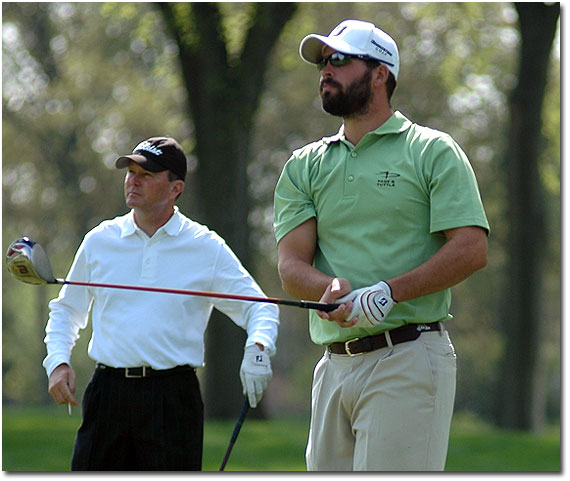 Today was the first round of the Minnesota Golf Champions tournament at Minneapolis Golf Club in St. Louis Park. Considered the year’s first Minnesota major, this tournament has a stellar field of Minnesota’s best professional and amateur players.

Reigning champion John Harris did not return to defend the title he won last year at Bearpath, so the 2009 crown is up for grabs. Two-time champion Clayton Rask of Monticello Country Club (above, right) shot a 4-under par 68 to take a one-shot first round lead over reigning Tapemark champion John Carlson of Wayzata Country Club.

Insurance broker Arthur J. Gallagher & Co. is the new title sponsor of the event (former sponsor Stanton Group is now a division of Gallagher). GPS devices were also provided by OnPar and were allowed for championship play by the Minnesota Section PGA.

Tomorrow’s second round starts at noon and spectators are welcome. Don’t miss this free opportunity to see some of the best golf of the year. 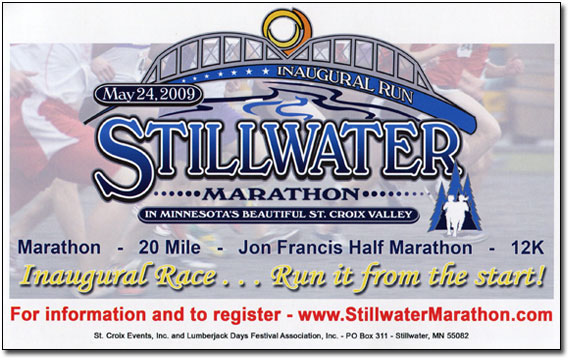 As the email I received today reminded me, it’s less than a month to the inaugural Stillwater Marathon, 20 Mile, Half Marathon and 12K. I will be running the half with a friend from Texas and I’m anxious to see what race organizers have planned for the first year.

Two notes from the email:

Packet pick-up will be open on Friday from 4-8PM and on Saturday from 10AM-8PM at the Stillwater Area High School. All races start at 7AM on Sunday morning. 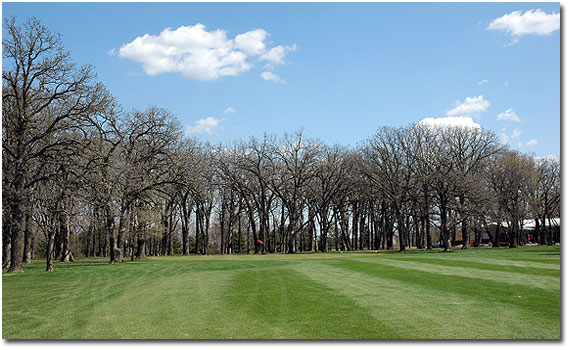 The people of Hayfield seem to crave two things with their golf: carts and fast rounds. I’d see big caravans of carts and think they allowed fivesomes or sixsomes, but in reality, people there just like to drive carts solo. If you walk, be prepared to play ready golf or you will get run over.

The course was in good condition and some of the rough was already somewhat long. The course isn’t very long (under 6,500 yards from the tips), but remember that wind impacts nearly every shot here and there are really only two flat greens out of the eighteen. The walking weekend rate was $31.50.

The Minnesota Golf Course Superintendents’ Association is again holding their annual fundraiser. Twenty private courses are participating in the 21st Annual Turfgrass Research Benefit Week, to be held June 1-5, 2009. A limited number of tee times are available at each course, with a few providing gift certificates.

Spots are filled in a first-come, first-serve manner and cost $120 per player (cart included at most courses). Entry forms must arrive by 3:00 p.m. on Friday, May 22, 2009. For more information, contact MGCSA executive director Scott Turtinen at 952-473-2582 or via email at scott@mgcsa.org.

We participated in this program last year and it was wonderful. Pick out a course (or two), print out the form, play some wonderful courses and help support turfgrass research in Minnesota. 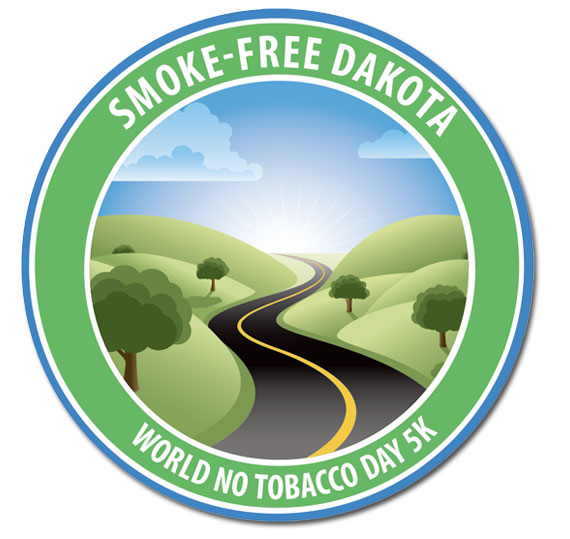 Race organizer Diane Tran contacting me about a race coming up at the end of the month:

Join Smoke-Free Dakota for the World No Tobacco Day 5K Run on Sunday, May 31, 2009! The run will benefit low-income children with persistent asthma to attend Camp SuperKids 2009, a weeklong summer camp sponsored by the American Lung Association in Minnesota. The USATF-certified 5K course will start at the eastern end (in Lilydale) of the Big Rivers Regional Trail, a nearly flat paved trail built on an abandoned railroad bed overlooking the confluence of the Minnesota and Mississippi Rivers. Please spread the word to your friends, family and colleagues and don’t forget to register yourself! 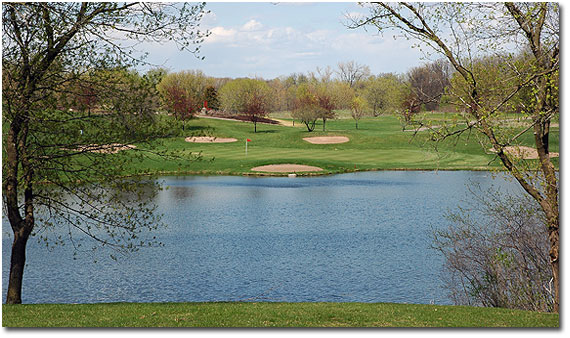 Just as Minneapolis Golf Examiner Kyle Anway posted a review of the same course, I got a call last week to join a group playing Sawmill Golf Club in Stillwater.

It’s been three years since I last played Sawmill and it does seem like a bargain at $18 (weekday walking rate). They are also currently giving out $10 off coupons for their sister Loggers Trail course if you play again by the end of the month.

Parts of the course were already mid-summer lush, but the greens were extremely firm and wouldn’t hold anything (we found out afterwards that they had just been rolled).

Sawmill is not a long course – 5499 yards from the whites with a par of 70 – but there are some nice memorable holes on both nines. The all-carry par three fifth (above) and the scenic par three thirteenth are two of my favorites.