Round 19 – White Eagle in Hudson 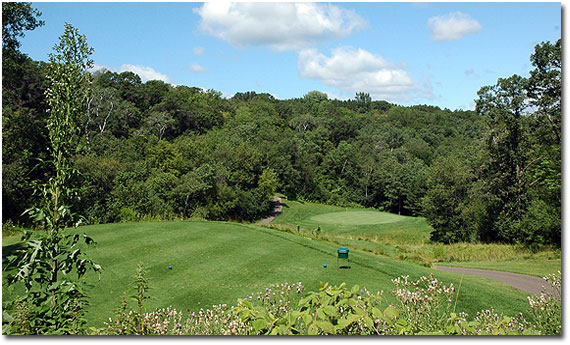 I’ve known the new general manager of White Eagle Golf Club, Matt Vandelac, as a longtime Tapemark Charity Pro-Am participant and jumped at the chance to play a round with him and course co-architect Garrett Gill a few weeks ago (even though it technically is Golfing in Wisconsin).

White Eagle opened in 2000 just north of Hudson, and I recall playing with owner Bill Block a few years after the opening. The original plan was to sell real estate around the course, and a number of lots were sold before the sector hit turbulence.

We ran into Bill again this time and he remains committed to the development. The hope is that a new river bridge will revitalize the economy in that area and the course will be maintained and upgraded until that happens. For example, their last newsletter touts that the waterfall behind the 18th green has now been completed.

Bringing in an experienced leader like Mr. Vandelac is also a sign they are committed to service. Matt was most recently at Big Fish Golf Club in Hayward, Wisconsin, and also helped open StoneRidge in Stillwater. Sign up for their eClub newsletter and you will get a sense of all the programs and specials Matt and his staff have implemented.

Even though I played poorly that day, White Eagle is a beautiful course. There are many holes that will remind you of the Brainerd Lakes region, with dense trees and vistas reminiscent of the north woods. It was fascinating listening to the pro and the architect discuss ideas for future updates as we played, but any changes will depend on funding.

2009 rates are $59 weekdays and $69 on weekends and holidays (plus tax). These prices include carts with GPS, which really are needed on the sprawling, hilly layout. Many specials and discounts are also available – give Matt a call at 888-465-3004 or email him at matt@whiteeaglegolf.com for more information.