Round 21 – Ridges at Sand Creek 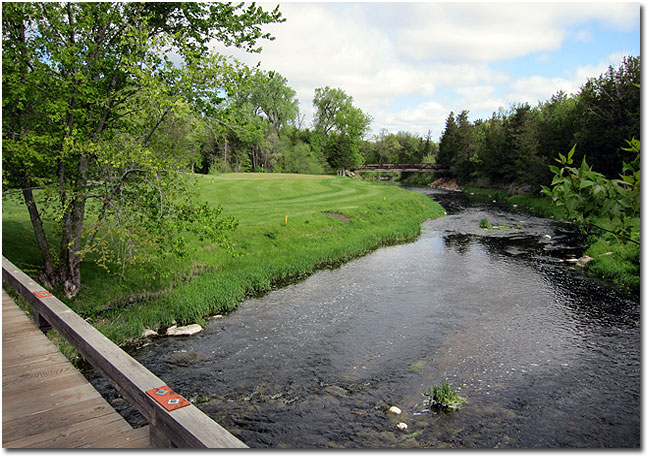 After a three-week break from golf, my friend Brad and I drove down to Jordan to play the Ridges at Sand Creek. We were paired up with another twosome and had a nice day on the course (although our scores weren’t anything to write home about). I must have been too tired that day as well, since my back nine score was about nine strokes higher than the front.

I don’t recall what the green fees have been the past few years, but this time it cost $43 to walk 18 holes on the weekend. That’s still a decent value, but it’s starting to get close to being on the high side for south metro courses. Then again, it seems like a great deal compared to courses like Legends Club ($79) and The Wilds ($80).

The course allowed a charity to set up a contest fundraiser on the the par three fifth hole. There were flags all over and you could make a donation where you could win prizes for hitting the green or making a hole-in-one. I normally encourage support of charity golf, but these unannounced weekend promotions sort of rub me the wrong way.

We had a little excitement at the end of our round, too – a wedding party was having a reception in the clubhouse and the entire group was out taking pictures on the deck (and being a little rowdy). I think a lot of them were wishing they were out on the course playing instead.

That reminds me – the only service issue we’ve had with this course lately was in the clubhouse. Brad and I stopped in at the turn and the person working the bar basically ignored us. If you don’t want to serve us, at least have some vending machines available.

On the flip side, the friendly rangers on the course have been wonderful, keeping the pace of play moving and offering rides to walkers from the valley holes back up to the prairie holes. We also haven’t seen any fivesomes on weekends lately (one of our previous pet peeves at this course).