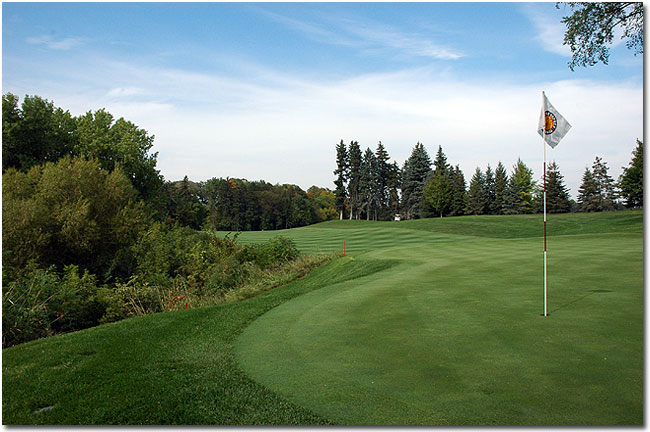 I remember when I first heard about Spring Hill Golf Club in Wayzata, three things jumped out: 1) Tom Fazio’s first (and still only) Minnesota design, 2) Michael Jordan buying a membership and 3) the reported $150,000 initiation fee. The plain and somewhat hidden entrance added to the mystique.

This week’s Gopher Invitational was the second time I have visited the course. I believe the first time was for an MGA Players’ Championship a few years back, but I only followed groups that day through part of the course. A caddie I met on Monday said if I hadn’t walked holes 14-17, I was missing the best part. I thought the first 13 were pretty spectacular, so I made sure to walk the entire course this time.

The championship tees measure 7,042 yards, with a rating of 74.7 and a slope of 147. Holes 1-6 and 14-18 are on the south side of highway 6, while the other seven holes are on the north side, connected via a tunnel. The first tee, practice area and eighteenth green are all located near the clubhouse, which sits on a bluff overlooking Long Lake. Google Maps has a decent satellite view of the layout.

As reported by many of the collegiate players, the course conditioning was perfect. I was impressed by the variety and character of all the holes, particularly the ones with major elevation changes. Many of the greens are elevated and several holes have tee shots that fall majestically to valley fairways. I was told the fall colors are breathtaking and should arrive in a few weeks (witness Peter Wong‘s excellent Spring Hill photography, which unfortunately does not seem to be online any longer).

Spring Hill is a playground most people will never experience, which is a shame. Even at the Invitational, there were signs on the clubhouse and pro shop announcing only members, players and coaches were welcome inside. The members I met were all very nice, however, as were the staff (caddies, a food server and head professional Jeff Kringen).