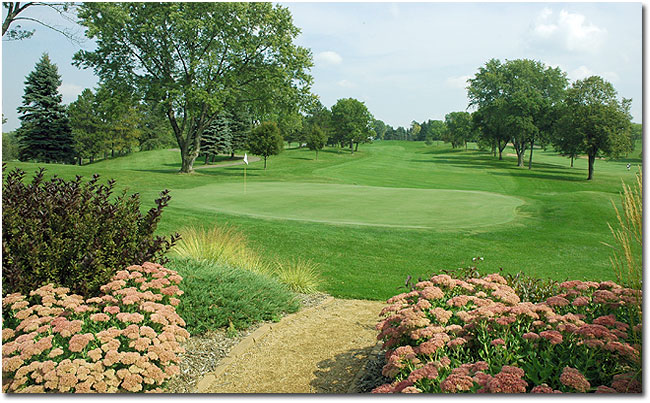 Last weekend, the Miller family and I were able to visit another Minnesota private course thanks to the Minnesota Golf Course Superintendents’ Association and their annual turf grass research fundraiser. I actually purchased the tee time for Stillwater Country Club during last year’s event, but was unable to make our scheduled day and time. Stillwater professional Mike Tracy was kind enough to let me re-schedule this year.

I had never been to this course before (even to take photos) and wasn’t sure what to expect. Charley Walters recently wrote that “A Stillwater family that applied for membership at Stillwater Country Club 13 years ago now is No. 30 on the waiting list.” Was this another ultra-exculsive country club or something else?

Turns out that the waiting list is long because it’s such a good value. I wouldn’t call anything in Stillwater “blue collar,” but SCC is very down-to-earth, with friendly members, low prices on food and drink and a relaxed, no tee times policy.

The golf course had many holes with unique character, particularly the par three thirteenth hole with a dramatic downhill approach over a mini-forest and the par four ninth hole with multiple tee boxes located at various points around a pond.

Course conditions were very nice, with beautiful flowers and landscaping all over. We played the 6,451-yard white tees (71.5/124), which included four par fours over 400 yards. The front side was also unique in that there is only one par three and one par five among those nine holes.

Despite a minor meltdown towards the end of the round, I shot a decent 46-47-93. There are a number of holes I’d like to play a second time now that I’ve seen them once, but overall we had a very enjoyable time.