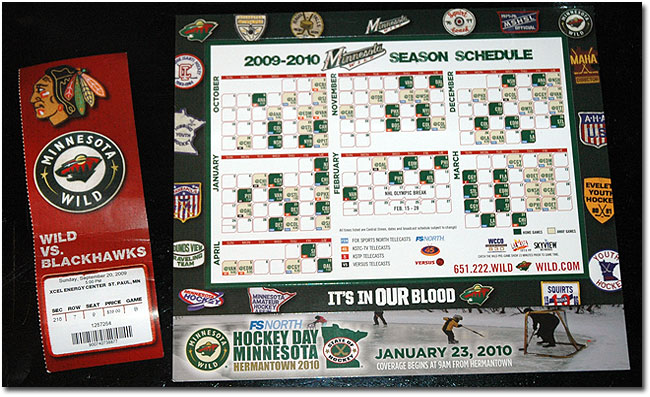 Tonight I was invited by my uncle to the second Wild pre-season home game against the Chicago Blackhawks. Normally, these early games that no one wants to pay for (or attend) are devoid of most entertainment value. This game was an exception to that rule for me.

Martin Havlat seemed intent to make an impression against his former team, scoring 86 seconds into the game by burying a nice pass from Pouliot. He added a second goal in similar fashion in the third, this time from Clutterbuck. His buddy “Siki” scored the third and final goal of the game with 2:57 left. I hope Havlat and Sykora stay healthy all year and get to play on the same line – seems like good chemistry there.

Chicago stars Patrick Kane and Jonathan Toews were scratched, so you can’t take too much from the shutout part of the game, but Backstrom seemed strong in his two periods of play. Khudobin got some work in the third and made me feel a little better in the event we lose Harding this year to the trade pool.

There were five (!) fights in this game, and all were fun to watch:

Attendance was never announced (that I can recall), so I wonder if the streak is over. The first 5,000 people received the magnetic season calendar (pictured above), but it doesn’t indicate which games will be in HD. Food seemed to be the same – the Davanni’s stand sold us two garlic cheese bread orders and two regular soft drinks for $15.50.

Should be an interesting season – Go Wild!