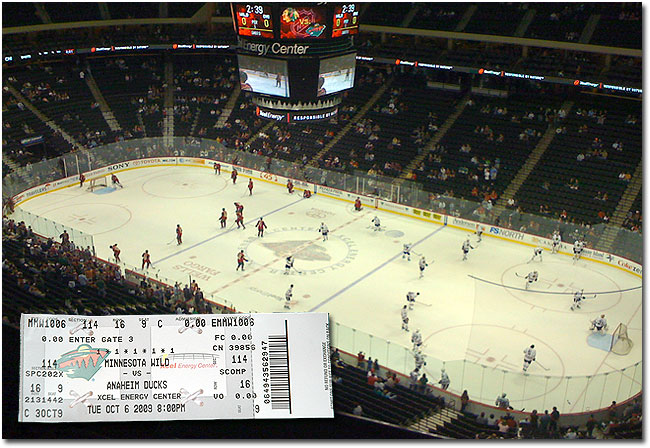 Thanks to the Wild’s youth hockey donation offer, I picked up a free ticket to tonight’s home opener versus the Ducks. I’ll be in section 114, row 16 – should be a nice spot to watch the Koivu brothers mix it up. Late start (8:15PM), but the Twins game will be on in the X starting at 4PM.

I haven’t written much about the preseason here, as there are now so many good sources of local hockey news. I rolled up all of my Minnesota sports into this one (including Hockey in Minnesota), so I haven’t had a pressing need to write just for the sake of having something new up. I will post when I go to games and hopefully have something unique to add to the Wild blogosphere. I’ll probably keep the @hockeymn Twitter account going this season too for some occasional in-game commentary.

For good hockey coverage this year, check the links in the sidebar for the sites and people I read regularly. Also, if you aren’t following these people on Twitter, you need to add them ASAP:

There are a bunch of others, too, but I’m finding it’s becoming increasing easy to get overwhelmed with information (and a lot of repetition via re-tweets). Hell, between the team’s own PR group (which gets better and better all the time) and the superb work of Mr. Russo, you pretty much get all you need to know.

UPDATE:
Well, that turned out to be fun. Everyone in the arena was focused on the Twins for the first period, so I didn’t really notice how we got to a 0-0 tie at intermission. The second period was just horrible. I knew as soon as John Scott and George Parros lined up in the third period a fight was going down. People around me didn’t know why I starting clapping right away, but the coach said during the post-game interview that was the turning point of the game. I’d also like to thank Mr. Wisniewski for letting us have the extra point without having to go to the shoot-out.

Not much new to report from the arena experience tonight. Everyone got a team wall calendar, the sell-out streak is apparently over, they played the Twins rouser over the PA and the starting lineup sequence and national anthem were a little different (but that might just be due to it being opening night). Craig Leopold sat by himself in his suite for most of the game. I ordered some teriyaki chicken wings, but they are now Brakebush, not BWW (I think this actually changed last year). I think there may be a few new food items available this year, too.

Wild are away from the X for like two weeks now…