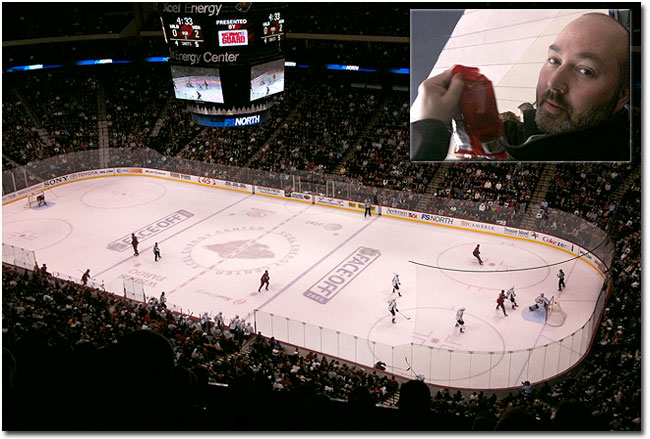 Last night I took my friend Phil (above) to his second ever hockey game at the Xcel Energy Center to watch the worst team in the west play the second worst team. Now one of them is only the third worst team, and unfortunately it isn’t the Wild.

I don’t really know what to say about how the Wild have started the season. On paper, I like our team and the changes that were made in the off-season. The reality, though, has been total suckle:

The three goals in 1:47 was amazing, but only one shot in the remaining 17:42 of that period? And I agree with Russo – how do you scratch Sykora and play both Scott and Boogaard? On defense, I wanted Skoula gone as much as anyone, but Zidlicky and Hnidy seem to be battling for the new crown of Wild defensive goat. Zids and his turnovers make me cringe and Sheriff Shane can’t seem to hit an outlet pass to save his life – it’s either a turnover or icing almost every time.

As Mr. Fletcher said during an interview in Chicago, “we’re still trying to get on the same page.” I was hoping that would have happened during training camp and the pre-season, but here we are 12 games into the season and the Wild sit in the western conference cellar with none of our “stars” hurt. Maybe that’s it – Johnnson and Butch are the secret sauce we need to turn it around.

If only it were that easy…