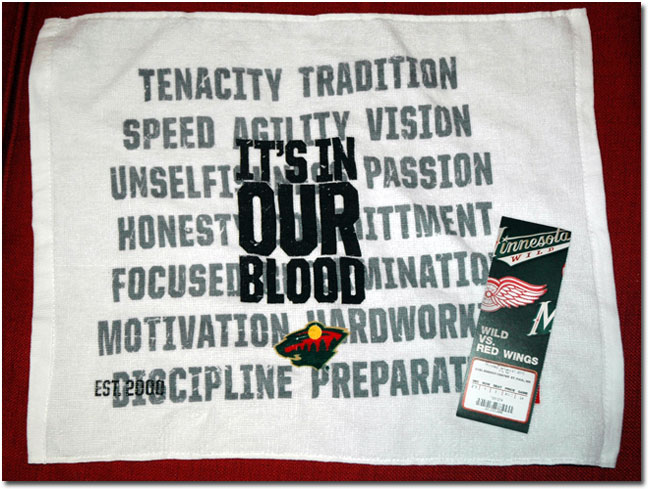 I know the Red Wings aren’t having their best year, but I’ve always admired the organization and it’s always a treat to get to see them play the Wild in St. Paul. I wrangled a last minute ticket from my aunt and uncle and got to see the return of Brent Burns to the Wild lineup. I thought he played pretty good for a guy coming back from missing 29 games. Gotta love his fitness quote in the Strib too:

“I can wash your shirt on my abs right now.”

We were one of the first 6,000 at the X who received the towel pictured above. I don’t really remember anyone waving them, but the start of the game was a little hard to watch. Harding was playing really well before he got hurt and it was extra painful to watch Bertuzzi with the breakaway goal.

As we’ve learned this year, never leave early. I usually would be happy with the loser point in this situation, but the Wild had so many good chances to win in the OT and shootout, that it really felt like a letdown.

Not much else to report – parking was a little harder to find for some reason and the pretzel I ordered was a little stale and way too salty. Oh yeah, I still long for free wi-fi in the building – will that ever happen?