I’ve in the middle of a long training trip to California (more on that soon) and thanks to my brother and his wife, I got to spend Sunday at Disneyland and Disney’s California Adventure. The weather was perfect – the sun burned off the early morning fog and temps were in the upper 60s with sunshine all afternoon.

I arrived about 15 minutes before the 9:00AM official opening time, so I stopped at the La Brea Bakery in Downtown Disney for a chocolate croissant and some cranberry juice ($7.74) before going through the main gate on the Disneyland side.

The first part of the day was spent hitting some of my favorites: Space Mountain, Matterhorn, It’s A Small World, Alice in Wonderland, Mr. Toad’s Wild Ride, Pirates of the Caribbean, Haunted Mansion, Splash Mountain, Big Thunder Mountain Railroad and the Jungle Cruise. Not much new to report: they are prepping for the return of Captain EO, Haunted Mansion was back to the original, non-Nightmare version, the Rivers of America were drained and the Jungle Cruise had a new (for me) piranha feature towards the end.

I had lunch at the Hungry Bear Restaurant in Critter Country (chicken sandwich, fries and a coke, $11.94) and did some shopping for a shirt Colleen wanted me to look for that she saw last June. The stores on Main Street were fun to go through, although I’ve decided you need to buy what you want when you see it, as every store seems to have unique things and size selections on more common items can vary wildly between locations. And even though it wasn’t terribly busy for a Sunday, this place moves some serious merchandise.

In the afternoon, I did a “park hop” over to the California Adventure side and got a Fast Pass for Soarin’ Over California. That must be one of the bigger successes in DCA, since the return time was about five hours later in the day. I set off from there to the Tower of Terror, which was incredible (as usual).

Much of DCA is under (re)construction, which created some tight confines in parts of the park. Walt Disney Imagineering had a great center set up, though, called the Blue Sky Cellar, which contained lots of information about their plans for the next few years (World of Color, Little Mermaid, Cars Land, etc.).

I walked around Paradise Pier and hit some rides I had never tried (Golden Zephyr, Maliboomer) and one I had (California Screamin’). The roller coaster was super-smooth this time and didn’t give me a headache (thankfully). DCA now has their own Toy Story Mania (like the one at Hollywood Studios in Florida) and the line was ridiculously long here as well, so I skipped it.

I took a break from the parks and walked over to Downtown Disney and the Disneyland Hotel. The World of Disney store didn’t really have anything different from what I saw in the parks and seems to pale in comparison to the one in Florida. The new D Street store was really awesome, though, and I almost walked out with two nerd-tastic retro shirts (Space Mountain era 1977 and a sweet Tron design).

I caught the monorail back to Tomorrowland, walked through a few stores in the castle and Frontierland, then went back to a store in New Orleans Square to buy this awesome Shag Haunted Mansion limited edition shirt: 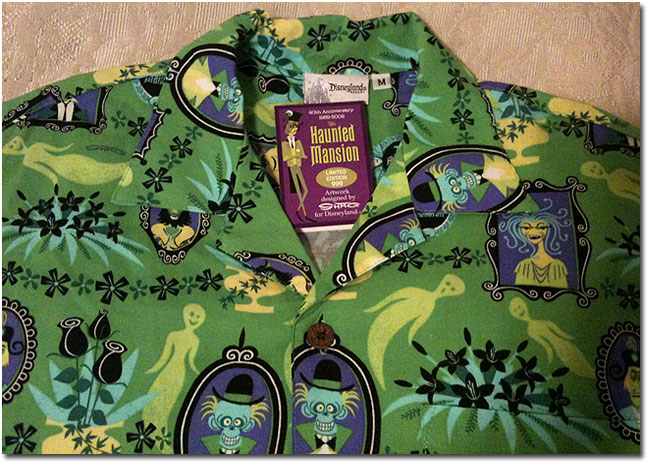 How cool is that? I also stopped back at a store on Main Street for a different shirt for Colleen (the original one she wanted was nowhere to be found). Thankfully, they still had the size she wanted – I think it was the last one in the whole joint.

The fast pass was burning a hole in my pocket, so I decided to go back to DCA before heading out for the day. The information desk had no suggestions for an indoor, sit-down restaurant, so I went over to the Grand Californian Hotel and ate at the buffet served in the Storytellers Cafe. It wasn’t super great food, but it was comfortable, warm, quiet and away from the hustle and bustle of the parks.

After dinner, I used the fast pass, jumped on the tram back to the parking area and hit all of the freeways again in reverse order to get back to Venice. Fun times!