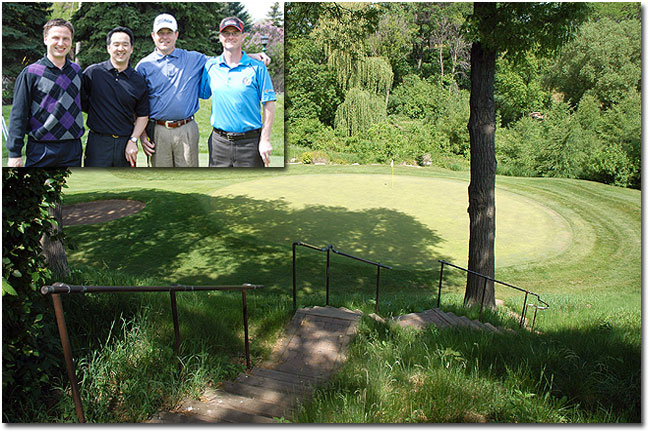 Wednesday was the fourth annual media day for the Minnesota Section PGA at Town and Country Club in St. Paul. Special thanks to Ed Heil of StoryTeller Media for the invitation.

The weather this spring in Minnesota has been record-setting (no measurable snow in March or April) and Wednesday was perfect. The format for the day was two-person match play scramble and I was paired with the head pro from Victory Links, Scott Roth. We were up against Mr. Heil and Steve Whillock, Director of Golf at Oak Marsh Golf Course in Oakdale.

Steve is preparing for the U.S. Senior Open qualifier at Mendakota in June and his game was on. He has a unique setup routine, but it really works – he crushed the ball straight down the fairway every time. Despite a strong start, Ed and Steve closed us out by the 15th hole. We had a great foursome, though, and had a very enjoyable morning.

Town and Country was in wonderful condition. The greens were fast, everything was green, flowers were blooming and construction of a new tee box on the 15th hole was proceeding nicely. I played T&C for the first time last year and thought it was a bit quirky. This year I decided I really like the uniqueness of the layout and absolutely love the history. The seventh and eighth holes still aren’t my favorite due to the closeness of Cretin Avenue, but all of the others are full of character and fun to play.

I talked to many people about the general state of the game right now and the consensus was downbeat. Courses are being sold for cents on the dollar, private clubs are dropping fees to attract and retain members and everyone is trying to make due with less. It seems like there will be a shakeout in the industry in the short-term, which will likely see several courses close for good.

Here is the official media day report from the PGA:

The Minnesota Section PGA held its annual Media Day April 28th at Town and Country Club in Saint Paul, MN. Twenty-two members of the media teed it up with twenty-two PGA Professionals in the Scramble format. The team representing Television/MGA took home the trophy for the second time in the history of the event by an 8-3 margin over the Print/Media. In the individual team competition Scott Seroka from KARE-11 TV partnered with Tim Brovold of Bunker Hills GC to shoot an 8-under par 64 to claim the top spot. Finishing one shot back at 7-under par 65 were Dan (The Common Man) Cole from KFAN Radio and his partner Bill Israelson from the Vintage at Staples. Special thanks to Town and Country Club and PGA Professional Ryan Rindels for hosting.

Be sure and check out the section calendar if you’d like to attend any of the great events conducted in the Minnesota section this season. One other plug – if you want to get better this year, sign up for a lesson with your local pro. It’s good for the game – in more ways than one…