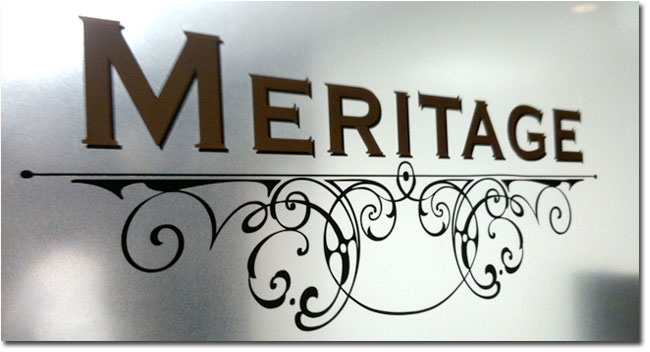 Colleen and I celebrated our 19th wedding anniversary earlier this week at the lovely Meritage restaurant in downtown St. Paul. I realized after we were seated that the courthouse where we eloped in front of Judge Joseph Salland was just a few blocks away. That day in 1991 included a quick trip to the airport after the ceremony and a visit to Disneyland for our honeymoon.

Dinner at Meritage was truly an event. Chef Russell Klein greeted us with happy anniversary wishes and two complimentary glasses of champagne. Service from the entire staff was exceptional all night.

We started off with two items from the amusements section of the menu: Billi Bi saffron mussel soup and confit pig tongue with sweet and sour squash. These were served with fresh sourdough bread and we each ordered cocktails – Colleen had Jameson and Ginger, while I tried something called a Nor’easter (vodka, cranberry and spice).

For the next course, Colleen tried the “selection of locally grown lettuces” with radishes, carrots and dijon vinaigrette, while I had the chicken soup with matzo balls. Both were very good.

Our main course selections were very hearty. Colleen ordered the cassoulet in the style of Toulouse, which consisted of ragout of pork, duck confit, garlic sausage and tarbais beans. I ordered the steak frites with bearnaise sauce, which came with a large, perfectly cooked New York strip steak.

For dessert, we ordered small ice cream treats from Izzy’s – hers was a scoop of pomegranate sorbet, while mine was a salty caramel ice cream pop (which really was on a stick).

A few weeks ago, the Star Tribune had a story that listed Zagat’s latest top 10 list of the best restaurants in the Twin Cities. Here is the list (by ranking):