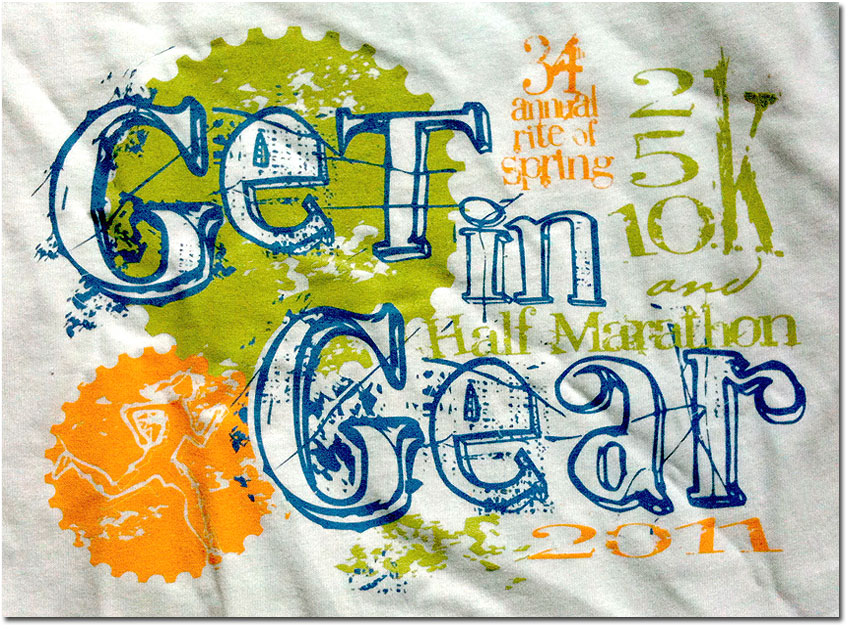 The seemingly endless stretch of bad weather for Get in Gear continued again this year, with drenching rain and wind. At least it wasn’t too cold – near 50F at the start. I wore two layers on my core with running pants and was about as comfortable as could be expected.

The 2010 Get in Gear was a PR for me (44:47), but I didn’t feel like my training this year would get me anywhere close to that. My mileage totals haven’t been terrible, but pace has been slower all year. I was just hoping to get a sub-50 time and stay under an eight minute pace. Here’s how the race splits played out:

There were a lot of people at the beginning, but it cleared out quickly and I was able to run at my own comfort level for most of the race. There was a strong headwind coming across the Lake Street bridge and I tried to draft off of other runners to save energy. The hills on this course, including the killer from the TCM course, don’t seem so bad when the race is shorter.

The 5K runners merged in with the 10K pack with 0.2 miles left to go and it got a little congested. The rain picked up as I crossed the finish line, but at least there was no line for food (bananas, salted nuts rolls, bread, milk and yogurt). I always park on the St. Paul side of the river, so I started walking back across the Ford bridge.

My friend Megan was running the half, so I waited a bit at the point where that course reconnects with the 10K course. It was cold and windy there, though, so I started walking backwards along the half course. I found her just after the 11 mile mark and she asked if I’d run the rest with her. She finished with a personal best time of 1:50:30 – congrats!

2011 Get in Gear Online Results