Robert Cray Band at the Pantages

Last Thursday, Colleen and I went to see the Robert Cray Band at the Pantages Theater in downtown Minneapolis. I believe this was the fifth time we’ve seen him, but this was the first time I’ve ever been to the Pantages. The Twin Cities truly have a plethora of beautiful theaters to watch live music and I really liked this one.

We had seats in the third row and Mr. Cray’s guitar amplifier was pointed directly at us, which was awesome. Our favorite keyboardist, Jim Pugh, was also right in front of us the entire show. I’ve written it before, but that guy is just so fun to watch play – especially on the Hammond organ. Richard Cousins was back on bass and Tony Braunagel played drums.

The show was scheduled to start at 7:30PM and we even received a “courtesy email” that said there would be no opener, so make sure to get there on time. Once we got to the theater, though, the friendly ushers said they were told the show would be delayed until 8:00. It did start right after that, but we were surprised when the main set was over after about 70 minutes and the encore consisted of just two songs (Chicken in the Kitchen and Time Makes Two). I don’t think the whole thing made it to the 90-minute mark, which was disappointing for a show with $45 tickets (plus fees).

I normally like to post set lists after I confirm them from other reviews, but I couldn’t find any other reviews of this show online. I know it’s hard (and expensive) to cover every show in town, but usually somebody posts something. Plus we are talking about a guy who was just inducted into the Blues Hall of Fame a few weeks ago in Memphis, Tennessee.

Just from memory, they played a few songs from the new album (This Time) and a mix of favorites such as Poor Johnny, Smoking Gun, Right Next Door and Phone Booth. I was hoping for Back Door Slam and The One in the Middle, but with such a short show, we were lucky to get what we did. I also don’t really remember any long Jim Pugh organ jams (there is usually one per show), but we were treated to several cool guitar solos by Robert (which were made even better by the amp placement – especially for the quiet parts).

The prices at the souvenir stand were reasonable, so I picked up a black hoodie on the way out ($40). They also had several CDs for sale, but nothing that we didn’t already own.

Ah, the trials and tribulations of a spoiled fan… 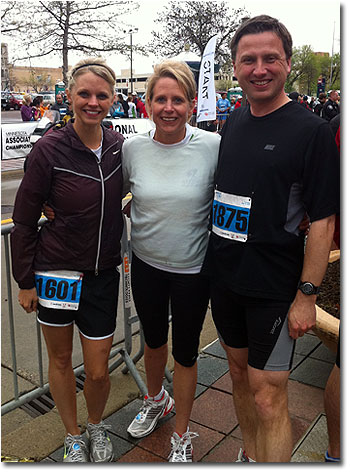 Last week I decided to give it another go at a distance I find really difficult – the one mile. I’ve only attempted one other mile race since high school and I almost passed out at the finish line of that one (the former Grandma’s 1 Mile at the Minnesota State Fair grounds). In that race, I thought I could still run in the fives and went out way too fast. I seem to recall hitting the midway point around 2:30 and then proceeded to hit a wall on the home stretch before finishing with a 6:34. This time I wanted to even out the pace better and shoot for a six minute mile (or at least a PR).

My friend Megan was running for Allina in the corporate wave of the TC 1 Mile and talked me into joining her. This was the seventh year of the event, but the first for both of us. The course is a straight shot down Nicollet Mall, starting near Washington and ending around the bend near Loring Park. It’s basically flat or downhill and the wind was helping most of the way. I could have done without the misty drizzle, but the cool temps were appreciated.

This race is really well organized – the multiple waves were timed so that runners missed the light rail trains and traffic was only minimally delayed. Megan and most of the thirty or so people from Allina ran in the second wave. I decided to run in the masters wave (along with Megan’s friend Susan), which was the fourth one out. The last two waves were the elite women and men and we stuck around to watch those amazing athletes smash the time bounties of 4:32 for women and 4:00 for men.

As for my race, I don’t think I was really prepared. I’ve run a fair amount this spring and had done some speed work on the treadmill the week before the race (7:00/6:40/6:20 reps), but I could tell right away it was going to be tough to get to six. My arms felt weird (I haven’t done a lot of upper body work yet this year) and my breathing wasn’t very smooth. I had hoped to do four 90 second quarter splits, but hit the first one at 1:22 and the midway point right at 3:00. I don’t really remember the third split and had no kick left whatsoever at the end (despite Megan cheering me on and seeing the clock two blocks away).

So 6:20 it was. That was still a PR, though, and I guess overall I’m happy with that. Megan also had a PR (6:38) and probably would have beat me if we ran in the same wave (make sure and check out her awesome new blog, Forty By Thirty). We all hit the Local afterwards for post-race drinks, which was really fun.

Watch out Minneapolis, I’ll keep coming back until I see a “5:” on that timer…

I was shocked and saddened to learn of the death of 28-year-old Derek Boogaard yesterday in Minneapolis. The 6-foot-7 enforcer played five seasons for the Minnesota Wild (2005-2009) before signing with the New York Rangers last year.

The Boogeyman was a fan favorite and my family loved him. We had the opportunity to meet him in person several times and his off-ice personality was a complete opposite from his tough-guy fighter image during games. Kind, soft-spoken and great with kids, his personal appearances were always well attended and appreciated by all.

The wonderful Star Tribune beat reporter Michael Russo has written an emotional blog post that has more insight into his life and the impact he had on those around him. My heart goes out to his family members, who I feel like I know after reading all of the Russo stories the past few years.

The opportunity to see 69-year-old Rock and Roll Hall of Fame member Paul Simon at the legendary First Avenue in Minneapolis for $50 was just too good to pass up. How many more times will that ever happen? I had to take some vacation time to make the mid-week concert, but I was glad I did. The new online ticketing site Etix worked perfectly when I bought the tickets and the will call system was smooth too – minimal lines at the multiple entry points.

This was obviously not your typical First Ave audience, which I discovered as soon as my neighbor Tim and I entered – people actually got there when the doors opened. We arrived a half hour later and the place was already jam packed. I normally like to stand by the soundboard, but we couldn’t get close to that. We ended up in a spot back by the rear bar and had a number of tall people in front of us, which sucked. Being by the bar at First Avenue is like being in the tenth row at a normal theater, though, so the view was still pretty decent (although the mobile phone picture above is crappy).

The crowded conditions took a back seat, however, to the sound. This was by far the quietest show I’ve ever seen there. This was a major problem for two reasons: 1) a lot of the songs were either acoustic or quiet on purpose and 2) way too many stupid people continue to talk during shows there. “Turn it up” became a rallying cry after almost every song. I’m just amazed the club allowed that to happen, but I guess the bright side was no ringing in my ears afterwards.

The ex-Mr. Carrie Fisher (and current Mr. Edie Brickell) was so fun to watch as he worked his way through the long set list (see below). He was quite short and seemed to be enjoying himself, even if he didn’t engage the crowd much between songs. At the very end of the show, he did introductions of the large band, but that was about it for banter.

I had heard samples from the new album, but have not purchased it yet. The So Beautiful or So What songs were all pretty good, but people obviously wanted to hear the old hits. Many of those were restyled, which was pretty cool (especially compared to people like Sting, who do the same thing over and over and over).

The highlight of the night for me was the solo acoustic version of The Sound of Silence that opened the encores. Almost everyone in the place shut up for that one, which added to effect (similar to when Tracy Chapman played Fast Cars there). The second encore closer was a perfect choice: Still Crazy After All of These Years.

Here is the full set list according to Jon Bream at the Star Tribune:

Jeers to the soundboard, but cheers to Rhymin’ Simon!