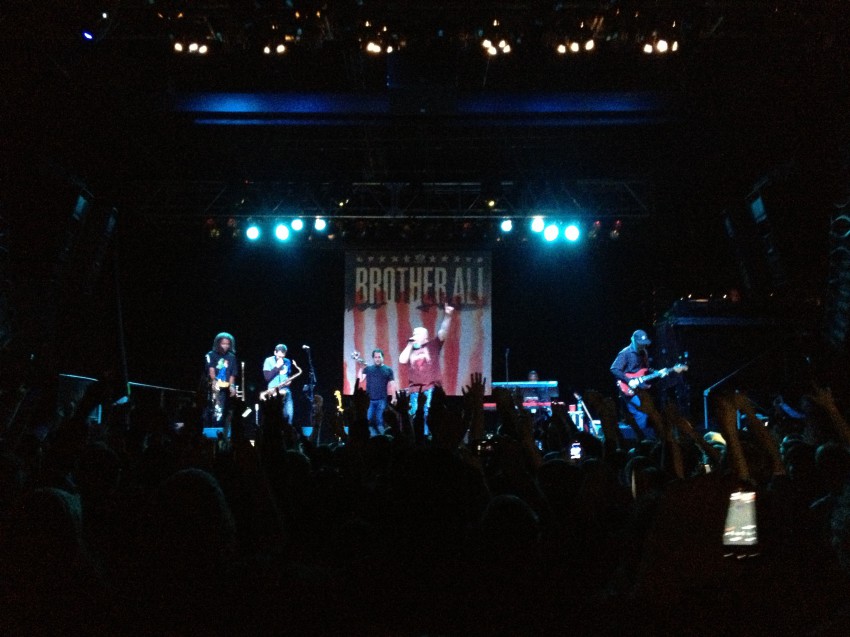 Fun show on Saturday night as I had the wonderful experience of introducing my kids to First Avenue. We got there just as the high school contest winner was finishing up his set. Then it was time for The Reminders, followed by Homeboy Sandman with DJ Sosa. Hadn’t heard any of them before, but headliner Brother Ali said they were his current favorite group and MC. Good enough for me.

The kids thought the club was pretty cool. We started off at the merch table, where they both ended up spending their money on T-shirts. We each got a bottle of Mexican Coke and I took my usual spot in front of the soundboard, while the two of them decided to move up in the “mosh pit.” The room was pretty empty for all of the openers and never got super crowded (which was nice).

Ali had a band with him this time around (Blank Tape Beloved?), which consisted of a horn section, a guitarist and the keyboardist from Heiruspecs (dVRG, who I didn’t realize was from St. Paul Central). There was also a little banjo thrown in on a couple songs, which would’ve been weird if you could’ve actually heard it. The sound was good overall, though, and the bass was especially strong.

Slug from Atmosphere made his usual one song appearance towards the end of the show and all of the openers came back out at the end for a great rendition of Truth Is Here. The other highlight for us were the dancers that came out during Mourning in America – just incredible flow.

We popped over to The Depot Tavern afterwards for some late night food and were able to snag one of the show posters from a staffer as we walked back to the car.

I have a feeling they will be back again…