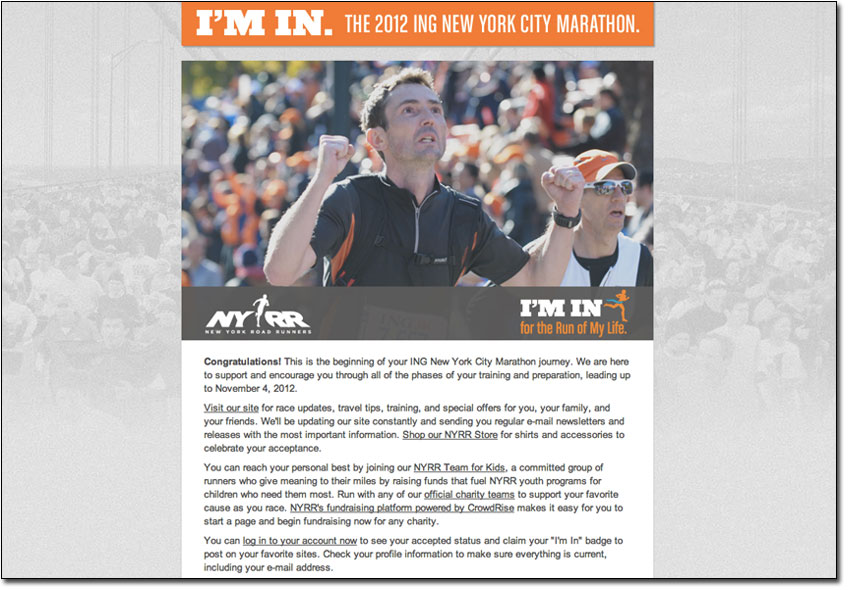 It will seem like a miracle if I actually get to finish line of the New York City Marathon next Sunday. First it took me three years to get picked in the lottery. Then the year I get picked, I have no money and get my first injury in 17 years of racing. And now here comes Hurricane Sandy to wreck havoc on race and travel logistics.

I originally planned to find sponsors to help with the money part, but each plan fell through one way or another. Unfortunately the whole family won’t be coming with, but thanks to my parents and some kind friends who live in New York, kid two gets to join me on the adventure. I also had enough frequent flier points to get a free ticket from Delta, which helped a lot.

My knee has felt much better since I switched back to a more padded shoe (my red Mizuno Wave Rider 15s), so I’m hopeful that won’t be an issue. I’ve stuck with the Runner’s World training program for the past 15 weeks and have only missed two workouts. In fact, my mileage chart the past two months has been the highest it’s ever been, peaking at nearly 190 miles in September.

I’m not sure if a PR is in the cards given the uncertainty with my knee, but it wouldn’t surprise me either. I’d love a 3:45, but anything under 4 would be wonderful at this point. I’ll be wearing bib number 27466 and start in orange wave #2, corral #27. There is a “track my runner” feature available, but it looks like they actually charge for it. Live race coverage will also be available nationwide on ESPN2 from 8am-11:30am central.

Weather pending, the kid and I will fly out on Halloween morning and spend the first half of the trip at the Yotel New York City at 570 Tenth Avenue (West 42nd Street). It’s near Times Square and the race expo, so that should be perfect. Hoping to get discounted tickets to see Peter and the Starcatcher on Thursday night and visit MoMA on Friday night (Target free day).

On Saturday, we switch to the other side of Manhattan and check in at The Pod Hotel 51 at 230 East 51st Street, near the United Nations. That night we will have pasta dinner at Alfredos of Rome in Rockefeller Center, which I am super excited about (it was my favorite restaurant at EPCOT before it shut down in 2007).

I’m supposed to take the Staten Island Ferry to the start of the race, which runs through all five boroughs (Staten Island, Brooklyn, Queens, Bronx and Manhattan) and finishes in Central Park (race map here). My wave starts at 10:05am eastern and who knows what the weather will be like.

If everything works out, we will have a day and a half of sightseeing after the race, flying back on Tuesday night. I’d like to visit the Statue of Liberty on Monday and whatever else we missed before the race (Empire State Building, B&H).

Now back to watching the weather forecasts…