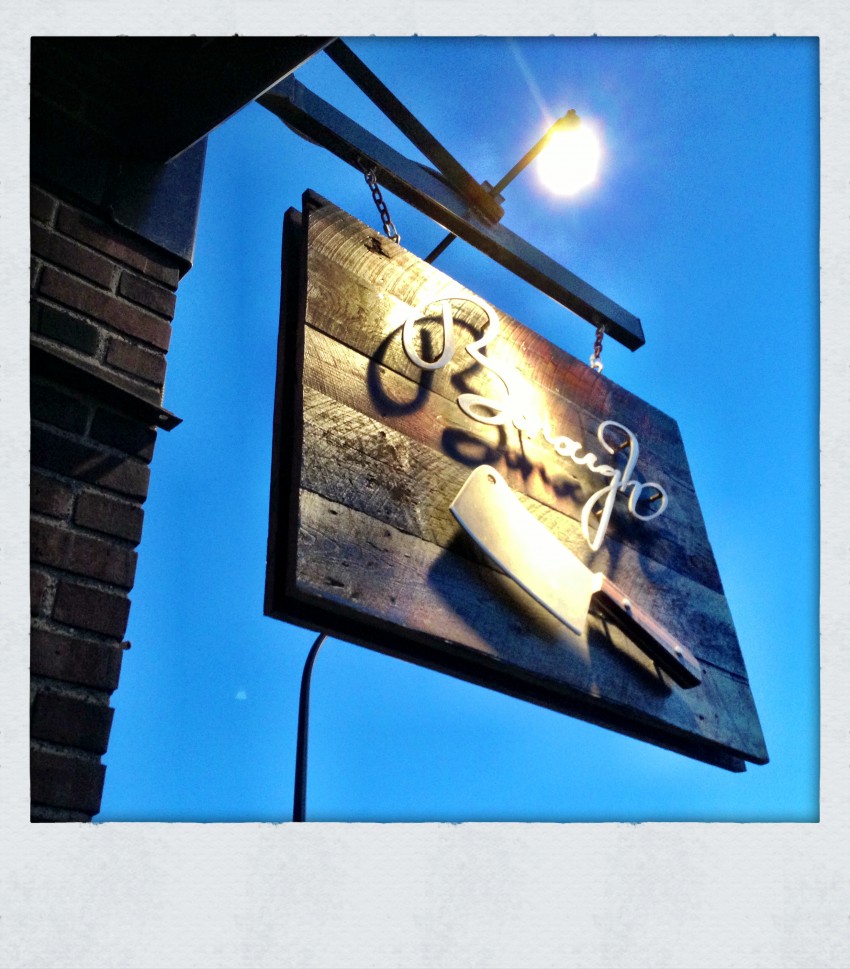 We decided it was time to visit one of the many new restaurants in Minneapolis and booked a 6:30 Sunday reservation at Borough in the North Loop. I knew it was close to our current favorite (TBF) and it turns out the place is practically neighbors with Bar La Grassa on the north side of Washington Avenue.

After securing metered street parking, we headed inside. The room has a dark, industrial vibe with big windows that open out to Washington and an opposite wall full of framed mirrors. The speakers have some serious bass and at first it seemed a bit excessive – sort of like having a dinner table in the middle of a club. I’ll cut them some slack, though, as they played the Beasties and Dessa during our visit.

We were seated right away, but our server didn’t make an appearance for quite some time. The rest of the night was fine service-wise, but the initial impression was a bit disappointing.

We had initially planned to stop downstairs at Parlour before dinner, but didn’t get there early enough. This setup is very much like TBF/Marvel Bar, but with Jesse Held instead of Pip as the connection to Town Talk Diner. I did end up ordering cocktails upstairs, but would like to go back sometime to check out the basement and order The Sunny Place for Shady Ass People (how could you not?).

Colleen ordered some hard cider, while I started with the server’s favorite, the Borough Old Fashioned (Old Grand Dad 114, Old Overholt, Piloncillo and Trinity Bitters). The food portion of the menu is divided into 1, 2 and 3 (small to large), along with a dessert section. We skipped 2 last night, ordering soup and fries from 1, chicken and sturgeon from 3 and donuts and cheese for dessert.

The soup (Champagne, Fingerling Potato Chips, Black Truffles and Chives) was incredible and was mixed table-side by a different server (each item was presented and explained when it arrived). The fries came topped with two fried eggs, which created a pleasant combination similar to the late night snack I ordered at The Depot Tavern.

The chicken dish was also a strange combination – fried chicken chunks, buttered potatoes topped with another fried egg and a dark soubise gravy. Chefs Nick O’Leary and Tyler Shipton (Travail) clearly like to mess around with food in unique ways and I’ve learned to just trust them and see how it all tastes together (pretty damn good). Colleen liked her fish, but I didn’t really try much of that one.

I elected to order another cocktail to go with dessert – a very nice sidecar (Pierre Ferrand 1840, Laird’s Apple Brandy, Prunier and Lemon). We were told the donuts were a relatively new addition to the dessert menu and they were awesome. I also liked the simplicity of the cheese and cracker plate, which came with three different cheeses and one large cracker that was the perfect size for the amount of cheese.

Prices were in line with Borough’s competition and the room filled up as the night went on (after being fairly empty at 6:30). The upstairs bar looked very nice and I believe they have a “kitchen table” seating area in the back too. A sign said valet parking was available for $7, which would be a nice option when street parking is unavailable. Side note to Minneapolis: you should really increase the two hour parking maximum to three in the North Loop – this isn’t exactly a fast food zone, if you know what I mean…