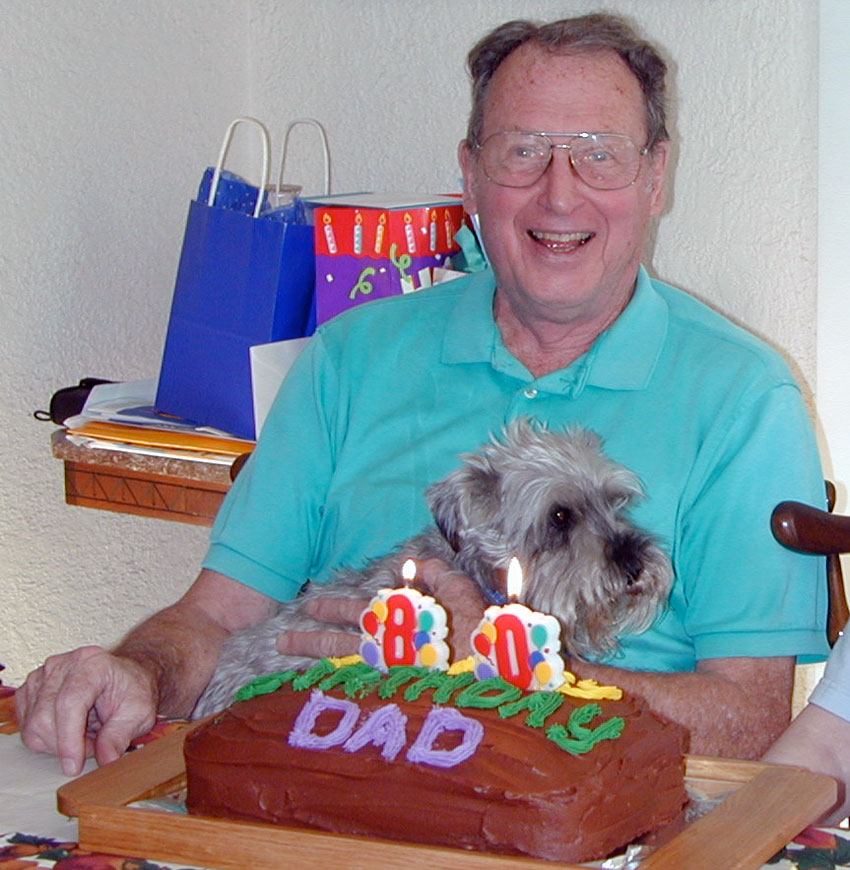 Tonight we lost one of the most important people in my life, Donald Leslie Smith. As I wrote after my grandfather’s 90th birthday, he was many, many things during his life. My mom is the oldest of his five kids, I am the first of the six grandchildren and my daughters are the first of six great grandchildren.

Grandpa Smith was married for 65 years to my Grandma Helen, who passed away almost exactly six years ago. During the course of his 94 years, he was a B-17 bomber pilot in World War II (and prisoner of war) and a banker with several different places during my lifetime (Liberty State Bank in St. Paul, a new bank he helped launch in Minnetonka and First National Bank in Minneapolis).

He helped advise me when I started my golf guide business, providing seed money, advice and serving on the board of directors (he proudly wore our golf shirts long after the company was done). When I started golfing, we played many rounds together at the Highland nine-hole course and I fondly remember him walking the Willingers course with me without a cart (no small feat, given the hills on the back nine).

We traveled together to the World’s Fair in Vancouver and I remember many summers on the North Shore when the Smiths would stay at the cabin next to us on Croftville Road. Colleen and I almost bought their house on Benhill Road when they decided to move to Mendota Heights and once they were on that side of town, he loved to take me out to eat at Cherokee Tavern on Smith Avenue. Holidays and birthdays at both houses hold a special place in my heart – lots of love, people, dogs and kids everywhere.

Thank you, Grandpa, for everything you did for me and our family – we will miss you dearly…

Born November 24, 1919 Died quietly with his loving family around him 12/30/13. Preceded in death by his parents Walter and Edna, beloved wife of 65 years Helen, and brother and sister-in-law, Warren and Evelyn. Survived by children Karen (Michael) Kingsbury, Greg, Jeff (Joyce Riestenberg-Smith), Stacey (Richard) Kohner, and Linda (David) Arcand, as well as six grandchildren, David, Brian, Lynn, Laura, Thomas, and Peter, six great grandchildren, and a nephew and nieces. A veteran of World War II, Don piloted B-17’s out of Italy. His plane was shot down, and he was a POW for the last 15 months of the war. Back home, he worked in banking, first for the First National Bank of St Paul and finally retiring from National City bank of Minneapolis in 1989. He was always very involved in community activities, first with the St Paul Jay-Cees and the Winter Carnival, and later with the United Way and as a school volunteer. Don made friends easily, and most friendships lasted a lifetime. Don loved his family, especially his wife Helen. They loved traveling together, taking regular trips to Hawaii, Europe, Washington State, the North Shore, or anywhere a friend wanted to go. He also enjoyed a good game of cards. He and Helen played bridge with the Innijiska Club for over 50 years. Even in his last year, Don still played bridge twice a week, as well as numerous games of Gin and Cribbage. An avid reader, he was always fascinated with history. Don was the Eternal Optimist. He always said he felt he’d lived through the most interesting time in human history, though he worried how the world would be for his great-grandchildren. Don was a wonderful man, and will be greatly missed by all who knew him. A memorial service will be held at St Stephens Lutheran Church in West St Paul Friday, 1/24/14, with a visitation at 10:00 and a service at 11:00. The family requests any memorials be made to Second Harvest, The Humane Society, or The Friends of the library.