Did all that really happen? 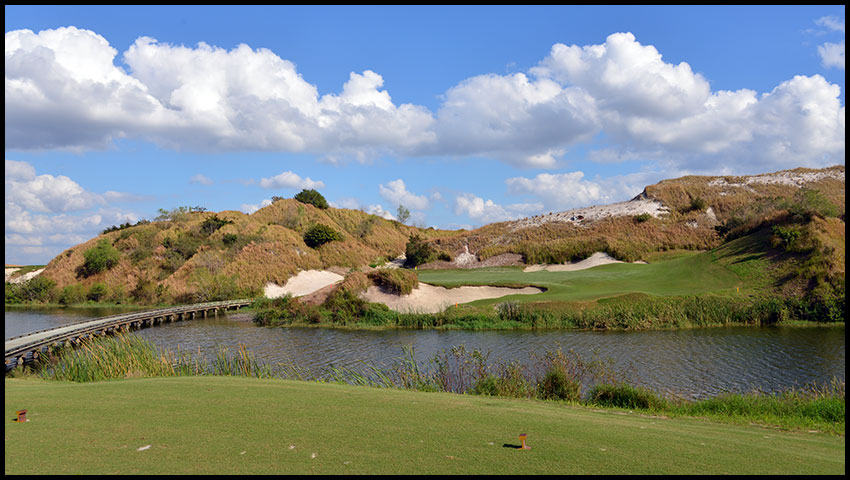 The typical “year-in-review” posts might be cliche, but they can also be insightful as one reflects and moves forward. I initially wasn’t going to write one, as the year ended on such a low note with the passing of my grandfather (and all of the moving drama at the beginning of the year). But I starting thinking about 2013 golf, running, music and food and decided it was worth hitting a few keystrokes…

The year started off with my otherworldly visit to Streamsong in Florida (Blue #7 above). Walking 36 holes after a marathon isn’t probably something I want to do again, but what a spectacular golf experience. The rest of the golf year was low key, as I played 11 fewer rounds overall (24 versus 35 in 2012) and half as many rounds on The Wilderness (7 versus 15). Scores were all over the map – I had a low round of 84 on Streamsong Blue and a couple of 99s (Streamsong Red and the tips at The Wilderness).

Running didn’t seem all that strong in 2013, but it was my second highest mileage total in the past six years (1029.9 miles) and as I’ve written previously, I set personal records at almost every distance. The cold weather in December really put a damper on things at the end, but I’m excited to return to Disney next week to repeat the marathon experience with Megan and Brian. My personal “Ragnar Ultra” with a great team of people was also a highlight of the year.

When I started researching 2013 music and food, I guess it’s easy to see why I never get ahead financially. I attended 37 concerts and visited 54 restaurants for the first time. I saw three Cirque shows this year, several comedians and a ton of great concerts, both big and small. Tom Petty, Pearl Jam, Macklemore, Mumford and Sons, Bob Dylan and Norah Jones were the biggest names, but I also loved seeing people like Charlie Parr, John Mark Nelson and Bomba de Luz. Several new venues for me too: the Cedar Cultural Center, Triple Rock and the Turf Club all got checked off the list in 2013.

In the food world, the Twin Cities really hit the jackpot with new places this year: The Rabbit Hole, Sandcastle, Buttered Tin, Cossetta’s (remodel), Smack Shack, Borough, Pig Ate My Pizza, World Street Kitchen, Burch Steak, Red Cow and FireLake. I hit up all of these in 2013 (some multiple times) and I can’t wait to continue visiting more new places (Parka, Gray House, Lake and Irving). This was the year of The Lowry for us and I finally made it to a few places I had on the short list (Piccolo, Zen Box, Buffalo Tap, Hello Pizza, Icehouse, Joan’s in the Park, Mystic Steakhouse, Scott Ja-Mama’s).

Aside from the Florida trip, most of my 2013 travel was for business. Sensi at Bellagio was a highlight, as was Bachi Burger off the Strip. I also really liked the Arrogant Butcher in Phoenix, the Calderone Club in Milwaukee, Three Fires Steakhouse in Kansas and the Kitchen Buffet in Iowa. Back in Florida, the new Be Our Guest restaurant at the Magic Kingdom is worth the long lines and the sandwiches at Wawa really earned their northeast legend status.