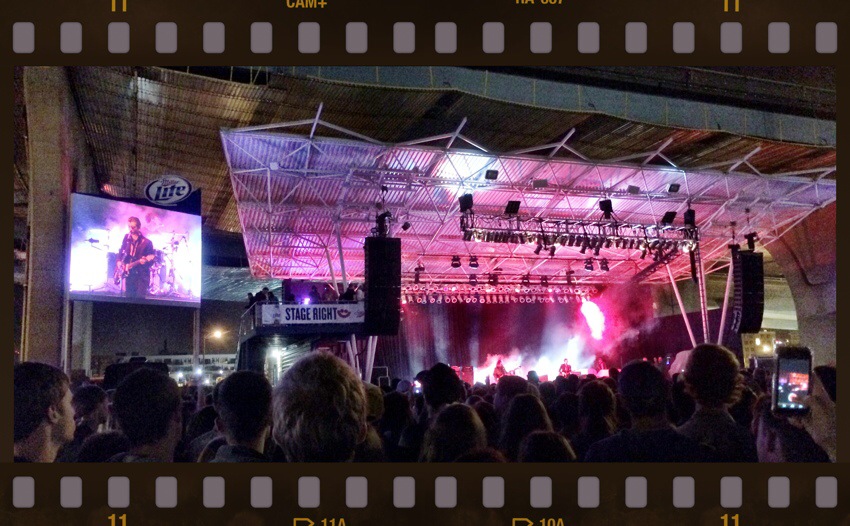 Last year we hit Summerfest for Tom Petty at Marcus Amphitheater (and by chance got to see most of Rhymesayers Day as well). This year we planned on two days: one for Arctic Monkeys on Wednesday and one for a repeat of Rhymesayers Day on Friday (this time with Atmosphere, Brother Ali, Grieves, PROF and deM atlaS). With nine different stages, strong lineups and a super cheap general admission price, Summerfest is hard to beat for value. On Arctic Monkey day, we also got to see Communist Daughter and Caroline Smith at no extra charge – bonus!

Last year it was just Colleen and I, while this year we had both kids. That mostly worked fine, but the crowds at the free stages can be a challenge. It’s also tough when everyone just stands on the metal bleachers – the Arctic Monkeys show in particular was really bad (that show should have been at Marcus in my opinion). Construction around downtown also meant extra long waits to get out of the parking lots (on Friday night we backed out of our spot and didn’t move – at all – for a full 45 minutes). I think we’ll probably take a year or two off, but I’m sure they will have someone next year I just can’t miss.

We stopped in Madison on the way down and gave SK and MK a tour of “our” campus. Of course we had lunch at the Nitty Gritty, visited the Memorial Union Terrace and had some Babcock Hall ice cream. Other stops on the tour included a walk up and down State Street, a visit to the University Bookstore, our first time at Strictly Discs and a quick tour of the new Union South. On our way out of town, we hit the always interesting Ella’s Deli. It’s amazing how much new construction has occurred in that city since we graduated. Might get to see it more often if MK really does end up going to school there too (she already has the Badger Swim and Dive shirt).

As far as food in the Milwaukee area, we hit a couple of repeat spots (Uncle Harry’s Frozen Custard and the Calderone Club) and one awesome new one (Traditional Pancake House). I also returned to the Potawatomi Hotel & Casino and ate at their sports bar, The Fire Pit, which was very good. No luck on their (relatively) high-denom machines, unfortunately.

Special thanks to Colleen’s cousin Cheryl and her husband Mike for letting us stay with them again this year – so, so sorry for the garage door. SMH…