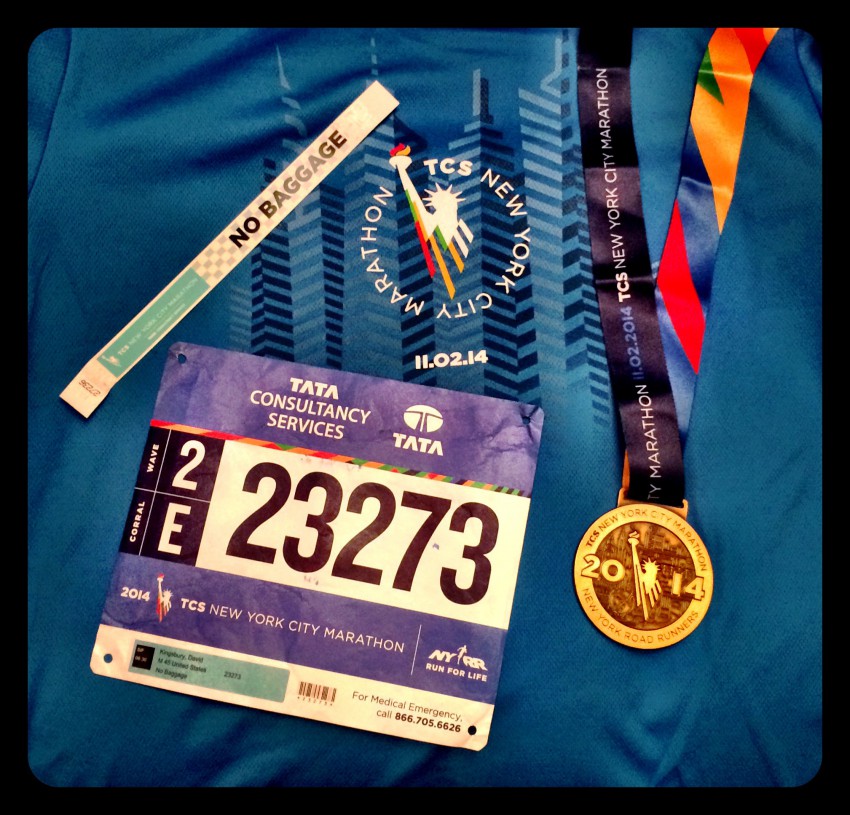 After the last time I tried to run New York went sideways, I wasn’t sure what would happen this time. Weather did end up playing a role again this year, but overall I just feel incredibly lucky to have had the opportunity to experience the race and the city.

The trip needed to happen on the cheap and I’m very thankful to my friends John and Dillon, who helped me with airfare and lodging. Dillon’s dad Tom also gave me a subway pass for the weekend and my mom snuck some extra spending money in my pocket when I left town on Friday night. I also feel extremely grateful to my immediate family – we don’t get to take many vacations these days and this chance for me to complete a major running goal is a true gift.

Heading into this week, I felt pretty good about my running readiness (even with the two week illness break in September). My yearly mileage is currently the second highest since I started keeping track and I really felt a PR might be possible. That was my A goal for this race, with a B goal of sub-4 and a C goal of finishing without getting hurt.

Option C would be the winning bet, I’m afraid.

When I read the National Weather Service had issued a wind advisory for marathon day, I knew it would be tougher than normal. When I heard the wheelers would start in Brooklyn instead of Staten Island for fear of being blown over on the Verrazano-Narrows bridge, I got really nervous. Turns out that part of the race was terrifying – the wind literally tossed me back and forth and nearly ripped my securely pinned bib off my chest (not to mention my hat). I read later that the reason there was no marker at mile one was because it blew off the bridge and into the water.

The weather Saturday was terrible – nearly the same wind and a constant, cold rain all day. Thankfully, the precipitation cleared out by Sunday morning, but the cold stuck around and the wind picked up. I left the Astoria Boulevard station at 5:30am, taking the N and 4 trains down to Bowling Green and the short walk to the Staten Island Ferry dock for my 6:30am assigned boarding time (made it with five minutes to spare). The waves were big and the wind was howling the whole way across. It’s really amazing how many people can fit on those boats – the police escort was nice too.

When I arrived at the St. George Ferry Terminal, I made a beeline for the waiting buses. They were nice and warm and it was great to beat the crowd and not have to wait outside any longer than necessary. The short ride over to Fort Wadsworth was quick and easy, with the driver dropping us off right in front of the security contingent. The police presence was both reassuring and frightening – you don’t see cops with automatic weapons and full riot gear at TCM.

The starting area zones had lots of great pre-race items (coffee, water, bagels, energy drinks), but it was crowded and cold and everyone basically had to wait around for two plus hours before being called to the corrals. Everything was running behind schedule too, but wave two was finally allowed in around 9:25am. It was very nice that they had extra bathrooms in the actual corrals and there were tons of Goodwill bins to discard the extra layers I purchased just for that purpose.

The canon went off for my wave and I officially made it up the bridge ramp and over the starting line at 10:15:19am. That first hill is supposed to be the biggest on the course, but I didn’t think it was too bad (other than fearing for my life each time a 50mph+ gust hit). My Garmin wasn’t very accurate all race and outright stopped measuring distance at one point, so I quit looking at it when I knew the A & B goals were shot. I held sub-nines for the first seven miles and hoped to at least stay in the nines for the rest of the race, but it was not meant to be.

I knew there were a lot of miles in Brooklyn and it seemed to never end. There were several points on this course that have very long straightaways, so you see waves of people for what seems like forever. I don’t really like that much – all my mind can think is how far I need to run to catch up. The stretches in Manhattan up First Avenue and down Fifth Avenue were similar. Brooklyn did finally turn into Queens, home of my least favorite part of the entire course. The Queensboro Bridge is just Evil. I was slowing down a few miles before that damn bridge, but it put an end to any thoughts of a decent time.

The crowds in Manhattan really were everything people say – the whole course has great support, in fact. It was also fun hearing the bands and DJs (I especially liked the Run-D.M.C. sample in Queens). The brief jaunt through the Bronx tossed a few more wonderful bridges in the mix and I was really surprised by the amount of elevation at the end of the race – it doesn’t look like much on the chart, but Fifth Avenue and Central Park hit you with gradual climbs when you least want them. And don’t get me started on the “little” bump between mile 26 and the finish. More Evil.

I’d been mentally playing a strong finish in my mind the past few weeks of training, but all I felt running past Columbus Circle and into the home stretch was pain and disappointment in my slow time (officially 4:24:14 and a 10:05 pace). I know the wind impacted every runner, but it was still a letdown to not be closer to at least my B goal. Oh well – still grateful for the experience (and to be walking around now without any major pain).

The finish line experience was interesting – I liked the recovery bag idea (everything pre-loaded) and the no bag check poncho was really nice (and an excellent way to warm back up on a cold day). The long march north was a pain, as I basically had to walk an extra three miles or so to get back to the right train station. That walk was made much more enjoyable, though, by all of the people who congratulated me on finishing the race.

Here are the splits reported by the timing mats:

I’ll write another post later this week about the rest of the visit (food, shopping, theater, etc) – stay tuned…