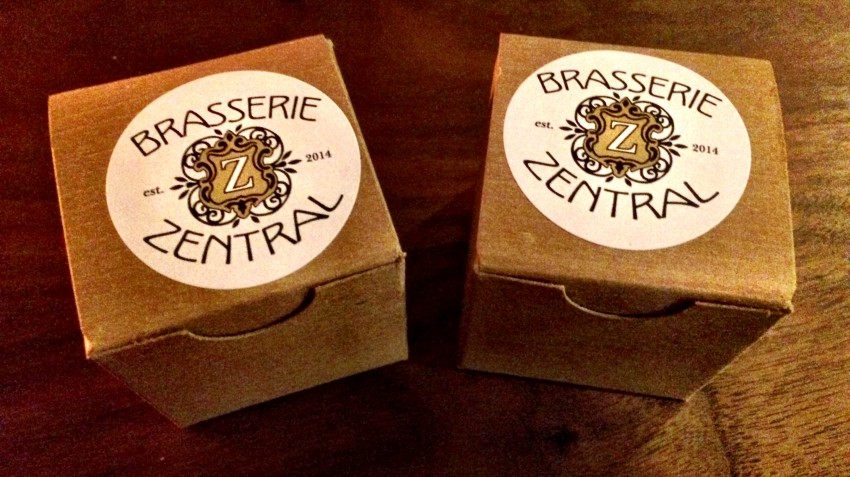 My seemingly never-ending battle with bronchitis at the end of 2014 has delayed so many things – including this past due report from our anniversary dinner at Brasserie Zentral in downtown Minneapolis. We had Sunday night reservations on 12/14 for the place that’s been at the top of my restaurant list ever since it opened in April. We celebrated our anniversary four years ago at Russell and Desta Klein’s original Twin Cities restaurant Meritage in St. Paul and wanted to see what they created across the river. Four days after our visit, Rick Nelson at the Star Tribune crowned it the 2014 Restaurant of the Year.

The space on the ground floor of the Soo Line Building (505 Marquette Ave S) is beautiful. I had noted on OpenTable that we were celebrating our anniversary when I made the reservation and our server immediately brought over complimentary glasses of champagne and congratulated us. They also had small chocolates at the end of the meal that said Happy Anniversary on them – very nice attention to detail.

We started off with the Polish style pierogi (potato, bacon, fresh herb sour cream, sweet and sour cabbage, $12) and split a butter lettuce salad (radishes & German ranch dressing, $8). Both were wonderful. My favorite wine continues to be Riesling and their menu had three different options. Our server was very helpful in describing the differences and brought me two samples to try. I ended up picking the St. Urbans-Hof, Estate 2012 ($11), which was nice. He also brought me a sample of a red that he said traditionally paired with The Schnitzel (don’t recall the name).

For our main plates, Colleen ordered the pan roasted Lake Superior white fish (salt baked celery root, Brussels sprouts, rye bread towel dumplings & pumpkin seed salsa verde, $28) and I had the schnitzel (veal, served with Viennese potato salad, cucumber salad & lingonberries, $30). Colleen said the fish was cooked well, but lacked flavor and was a bit bland. She also didn’t care for the dumplings, which she said were “gooey.” I loved the schnitzel, which arrived with a puffed up coating and a cloth-wrapped lemon. Combined with the lingonberries, it was divine.

For dessert, I ordered a cookie sampler (with the previously mentioned anniversary chocolate), while Colleen had apple strudel. Don’t have the details or the pricing on these two, as they don’t have the dessert menu online. We both enjoyed the desserts and left happy and full, with two small boxes that contained shortbread cookies. We parked in the ramp next door, but you also have the option to take the light rail, which runs right outside their window (and has a station across the street). Valet parking is also available for $10 and there is plenty of street parking nearby too, if you prefer to use the city parking kiosks. 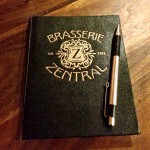