Sunday Dinner at Tongue in Cheek 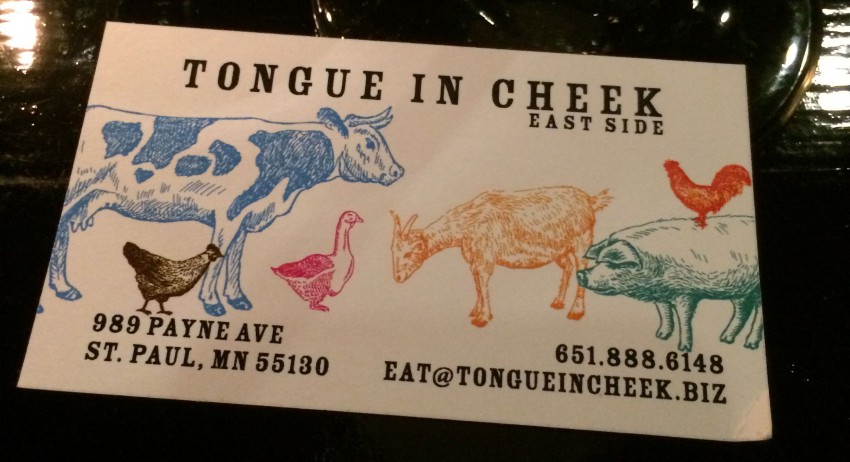 Here’s another post I meant to write in 2014, but time flies when you are recovering from the plague. Way back on Sunday, December 28th, Colleen and I trucked it over to St. Paul to visit the next hot spot on Payne Avenue, Tongue in Cheek East Side. Just down the block from Ward 6, Tongue in Cheek is headed up by former W.A. Frost alumni Leonard Anderson and Ryan Huesby, along with Anderson’s wife, Ashleigh Newman. Throw in Cook St. Paul and soon this part of town will be known for more than the just the old Payne Reliever, no?

Anderson mixed in a stint at The Hanger Room (RIP) between Frost and the new place, while Huseby was the general manager of The Happy Gnome. Newman was a manager at the former Nochee in Minneapolis, has long been involved with the Humane Farming Association and reportedly created much of the design and artwork for the space. Good pedigrees, no doubt.

The “heart of the concept” at Tongue in Cheek is stated as “sourcing animal products from farms that only use sustainable and humane farming practices.” The menu had several different options, including two 6-course tasting menus, one for omnivores ($59) and one for herbivores ($49) – add $20 to each for matching libations. I was looking forward to the $2 teasers, but we ended up only ordering one for Colleen: the charred feta with strawberry and black pepper jam (which was gone faster than I could take a picture).

We ordered a couple of items from the “To Share (Or Not)” section: fries & gravy ($6) and steamed pork buns ($12). Both items were good, with pretty presentation. Our only complaint was that the service was very slow. The place wasn’t full and there seemed to be a lot of people working, so I’m not really sure why it took so long for that initial order to come out. I also seem to recall that Colleen ordered a glass of wine and it stayed empty for a long time before she was asked if she wanted another. My “Why Not Minot?” cocktail (white whiskey, St. Germain, lime and agave) was tasty, but also took a long time to arrive.

For our main course, Colleen had the soup of the day, which was a white sweet potato with chili pepper seasoning affair that she seemed to like a lot. I ordered the mac n’ cheese + pork (white cheddar, arugula, parmesan – $16) and enjoyed it twice – half at the restaurant and the other half for lunch the next day at work. Both of us were too full for dessert, so we skipped out on the three options.

I’d really like to give them a “RECOMMENDED” just based on the concept, the nice room and for a being a new foodie place not located in Minneapolis. Based on our initial service experience, though, I think we need to try it one more time before making a decision. Stay tuned…