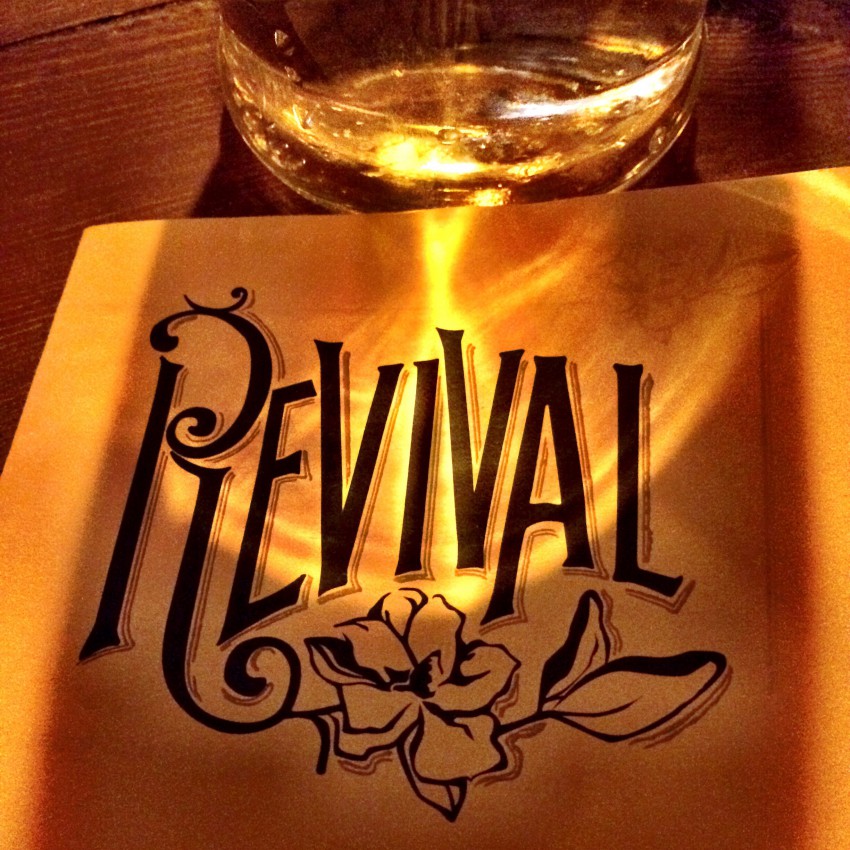 Last week Colleen and I decided to check out the fried chicken hype machine that is Revival Minneapolis. The southern food spinoff by Corner Table’s Thomas Boemer has been the talk of the town since it opened. Lots of food critics I follow online have been raving, as have several chefs and restaurant industry people. They don’t take reservations and waits have reportedly been long, so we decided to try later on a Thursday night and still ended up waiting 70 minutes for a table. Was it worth the wait?

Earlier in the day, the Revival Twitter account had a tweet about a newly christened “Wilford Brimley”: their burger, substitute mac and cheese and add two pieces of Tennessee hot chicken. Alas, our server had never heard of it and that tweet now seems to be gone, but that’s what I wanted. Minneapolis Eater has named the burger “hottest in Minneapolis St. Paul” and the recent City Pages Best Of for 2015 awarded them the coveted “Best Fried Chicken” title.

The burger was very good – two tasty patties with cheese, mayo, pickles and some awesomely thick slices of top notch bacon. The mac and cheese wasn’t bad, but I was hoping for more. Then there was the chicken. Our server had asked me if I wanted southern style or Tennessee hot. Colleen was ordering southern style, so I decided to get hot, which our server said was her favorite. I completely regret that decision – there is flavorful hot and then there is burn your lips, sweat down your forehead hot. I don’t enjoy the latter and had to remove all the skin and breading to eat any of it. I was extremely enviously of tables that ordered whole chicken platters southern style, which is what I’d get next time (and the farm greens salad with buttermilk dressing and cornbread croutons). Along with her chicken, Colleen also had biscuits with sorghum butter and house pickles. She said the biscuits were her favorite thing, which isn’t a great sign when you are the pickle queen.

So was it worth the wait? Probably – I’d just like a do-over. Our server was great and everyone there is working under a lot of stress due to the crowds. The room isn’t very big and they really could use a dedicated host to handle all the people standing around waiting (both inside and outside). All you really want as a guest in those situations is fairness and we had several people get served before us because new arrivals weren’t being tracked very well. The food is very good, although I can think of at least two places that have fried chicken I like better (Sandcastle and Lyn 65).