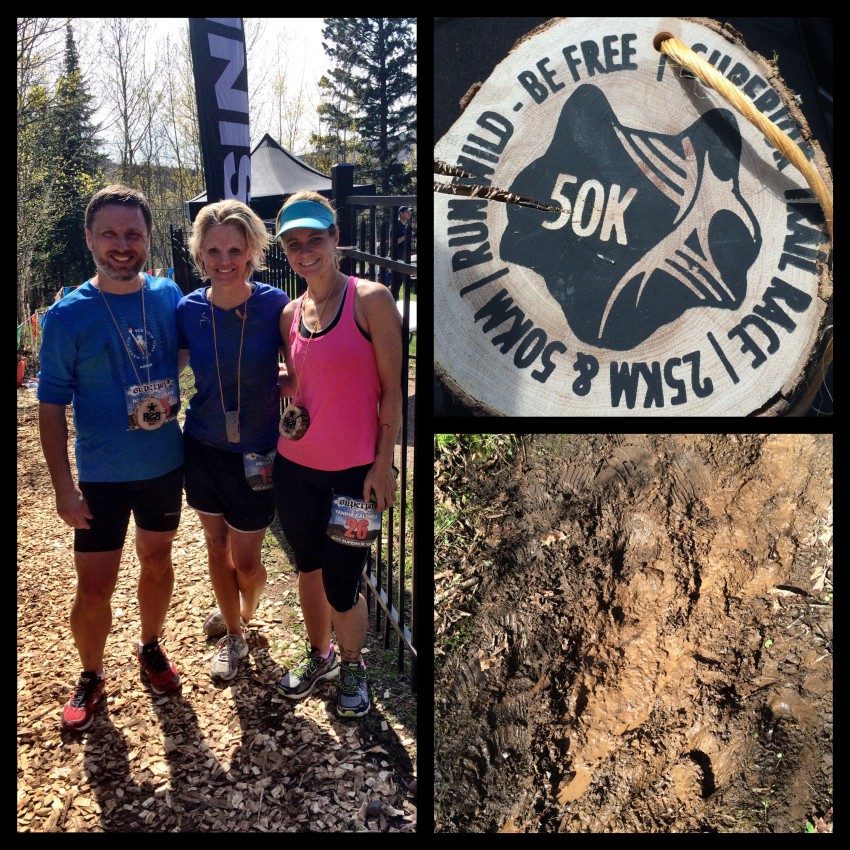 I’d been warned by Jean that this was a hard race. I had joked with the people at the Arrowhead 135 that I was planning to run a “baby ultra” as my first trail race (and first race longer than a marathon). They all laughed at me and said there is nothing “baby” about Superior.

Were they ever right.

The 50K event starts at my old haunt, Lutsen Mountains ski resort. I’ve been there so many times growing up – skiing in the winter, alpine slide and Moguls in the summer. Hell, I even had brochures to buy one of those condos when they were first built. This made everything feel very comfortable before the race. I had stayed at my sister’s apartment in Duluth the night before (with awesome marathon spaghetti from Grandma’s), woke up at 3:30am and pulled into the parking lot around 5:45.

The race organizers, Rock Steady Running, had an efficient check-in center where the gift shop used to be. I got my bib (#105) and waited for Megan and Yaniha. When I signed up for this race, I didn’t know Yaniha had already registered. When Megan found out we were both running, she got one of the last spots in the 50K. This, of course, came with the added benefit of the world-class Menning Support Team. Joan and Tom are just wonderful – hauling bags between aid stations, taking pictures, providing motivation when we want to drop out and offering a seemingly endless supply of Coke.

Minnesota has been in a drought the first part of the year. The week before the race, it rained just about every day. Saturday turned out to be the only sunny day of the week, but the trail was a mess. I’ve never seen so much mud in my life. There is still dirt on my feet now (and I’ve taken multiple showers). I threw away my socks and don’t know if my Mizunos will ever be usable again. The temperature at the start of the race was in the lower 40Fs, but quickly climbed as the day went on. It never seemed too hot, though, and there was a light breeze most of the day.

I went into this race thinking it “just” a marathon plus an extra five miles. The 4200 feet of elevation change that everyone talks about didn’t really register in my mind, but I’ll never forget those six climbs now: Mystery Mountain, Moose Mountain, Oberg Mountain, Levaux Mountain, Britton Peak and Carlton Peak. From a snobby skier standpoint, these aren’t “real” mountains, but as part of a trail race? Oh my. I honestly thought the return back up Moose Mountain was going to kill me – it was hard to even walk it slowly.

The aid stations are spaced nicely – 7.75, 13.3, 17.7 and 23.25 miles. The volunteers were amazing everywhere, but especially at those stops. You could tell a lot of them were trail runners themselves and knew exactly how I was feeling. They gave me salt tablets at the last one when I told them I was getting leg cramps and someone was always there right away to refill my water bottle. The selection of food and beverages was perfect.

I tried to run with Megan and Yaniha at the start, but we ended up getting separated a bit by the crowd of people on the single track course. They never got too far ahead at this point, though, and we reunited at the Oberg aid station. We stayed together from there to Britton and Carlton and back to Britton. The hike up Carlton was really intense, but the view at the top was amazing (along with the greetings from Chuck and his offer of free beer). I started to fall behind between the two aid stations and ended up about 35 minutes behind by the end.

My primary problems during that time were mud, fear of falling and/or twisting an ankle and the leg cramps, which strangely moved from one leg to the other (and back again). I did fall once when my right thigh cramped up, but thankfully it wasn’t into the mud. Tom gave me a great pep talk at the last aid station and asked one of the volunteers if I was clear of the cutoff. Normally, if you don’t finish within eight hours, it’s not official and the finish line closes. With the muddy conditions this year, they announced at the start that we had nine hours. The volunteer said I could walk it in from there and still be fine, which is close to what I ended up doing.

That last 7.75 miles was just brutal. I didn’t see many other people the entire time, climbing Moose was horrible, Mystery Mountain seemed to never end and the all of the downhills that I wanted to run down were incredibly muddy from all the traffic from the 25K runners. The mud was so thick and unpredictable, I didn’t want to risk injury by trying to run through it. It wasn’t all walking, but the run/walk ratio dropped significantly compared to the rest of the day. I was so happy to finally cross the Poplar River again and get back on the chalet road, where I found Tom with more words of encouragement. It was easy to run the rest of the way after that.

The finish line sits right next to the old condo pool, which was great. The party was still going when I crossed the line after nearly 8.5 hours. They announced my name and placed the tree stump around my neck. Success! I headed for the hoses to wash off some of the mud, got a Coke and clean shoes from the Mennings, posed for pictures with Megan and Yaniha, then hopped in the car to drive back to Minneapolis for the Kids in the Hall concert at the State (that I thought I’d easily make when I bought the tickets).

My official time was 8:29:06 (16:24 Minute Miles), which was good for 169th out of 186 overall, 128th of 136 men and 53rd out of 56 male masters. As Megan said, the time and rankings aren’t what it’s all about, but my goal time of seven hours was overly optimistic. I’d like to blame the muddy conditions, but most others didn’t seem to have a problem. Hell, the winner ran a 4:08 (8:00 Minute Miles) and was totally flying through the mud when he passed us on the return loop – ten whole miles in front of our pace.

Still, happy to finish at all and check off the first “baby ultra” and trail race. It was an incredible experience in a beautiful part of Minnesota with a bunch of amazing people. When I checked this morning, there was one spot left in the fall 50 miler (which Megan and Yaniha are both running – Megan for the second time). I thought about it briefly, but opted to wait. I’d like to try that distance on a course that isn’t quite that brutal before heading back north. Perhaps next year for that one.

So now I need to decide what comes next. The only race I’m currently registered for is the State Fair Milk Run 5K in August, so it’s probably time to commit to something for the fall. I’m still leaning towards the Des Moines Marathon on October 18th. It’s relatively inexpensive and would help with the 50 States goal. The I-35 Challenge is intriguing too: you run the Kansas City Marathon on Saturday and Des Moines on Sunday. Of course, this would be significantly more expensive and logistically difficult – not to mention running 52.4 miles in two days. Surf the Murph at the end of October would be an “easier” 50 mile course (and one that I’ve already run one loop of with Megan), so maybe Des Moines and that?

Had a few more thoughts after publishing the original post: