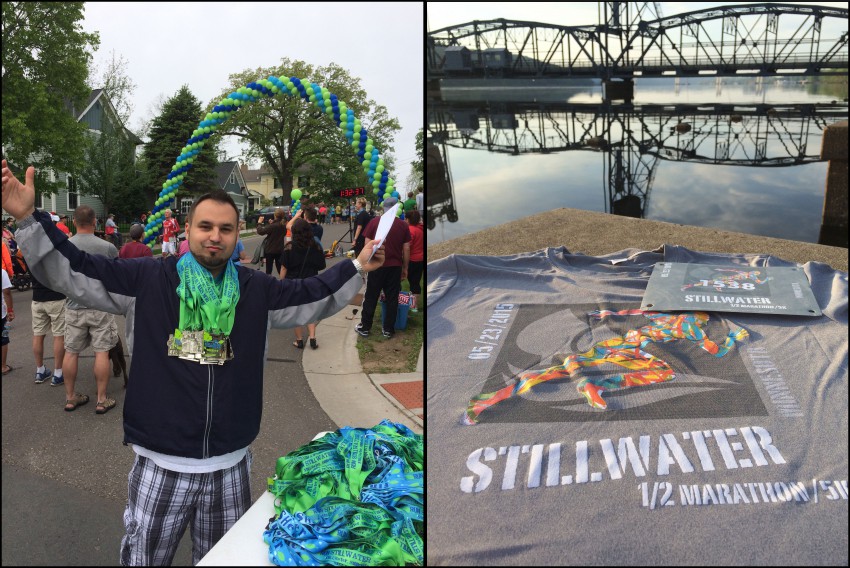 One week after running John Storkamp’s wonderful Superior Spring 50K in Lutsen, a friend and colleague talked me into doing his race, the Stillwater Half Marathon. Starting at 8AM on May 23rd, this was a very different experience from the last time I ran a half in Stillwater. Ryan bought the race two years ago and has tweaked the course both years. It turns out that was a popular choice – the number of participants nearly doubled this year to around 1100 people (5K and half combined).

Full disclosure: Ryan provided me with a complimentary entry in exchange for feedback on the race. Thankfully, I don’t have to make up nice things to say – this was a fun, well-organized race that a vast improvement on my 2009 experience. The new course runs along the Gateway Trail for the first nine miles or so, which was nice and flat (with no real road traffic to deal with). There are some short, nasty hills at miles 10 and 11, but the finish is all downhill (including a steep drop at the actual finish line just in front of Pioneer Park).

Race day morning was low stress and easier than I expected. Race headquarters was located at the Water Street Inn in downtown Stillwater and runners were instructed to park nearby. I found a spot in a city ramp a few blocks over (on Second between Mulberry and Myrtle) and walked over to registration to get my shirt, bib and timing chip. The room had many helpful staffers, race numbers were posted on the wall if you didn’t know yours and there were lots of extra large safety pins to attach your bib. That whole process took me about 45 seconds, so I walked back to my car and dropped off the extra stuff.

The start to the half marathon was located just off highway 36, almost all the way back to I-694. There were two rows of busses parked on north Water Street – one side for 5K participants and the other side for the half marathon. I boarded the first bus to leave for the start and our driver got a little lost. There were people that knew where we should be going, though, so he turned the school bus around and got us to the start with plenty of time to spare.

The starting line was near the Gateway Trail bridge under highway 36, which quickly filled up with busload after busload of runners. There were about eight portable toilets set up to the side of the trail, but they were on the wrong side of the starting line. This basically meant that everyone who was still in line when the gun went off needed to backtrack to trigger the timing chip. Not a big deal, but it’s something I’d change in the future. I also wasn’t wild about having a prayer said before the race (and no national anthem). It was cool to have Minnesota race legend Gaylen Morse announce the start and finish of the race, however – he is such a big part of the Get in Gear and Twin Cities Marathon experience.

If you sign up early enough, you get a personalized race bib (like many other races are doing now) and the gender specific tech shirts were very nice (with a cool design). I’m not big on finisher medals for shorter races, but Ryan was very proud of the interlocking design of his medals. If you run the half along with the two other races he produces (the Lift Bridge 10 Mile on July 25th and the Log Run 10 Mile on September 19th), you will have three medals that all snap together.

Water stops were fairly spaced, well-staffed and didn’t run out of liquids (unlike some other smaller races I’ve done). I found out these stops are staffed by volunteers, but each person is also paid an hourly wage that goes to whatever charity they are supporting. Not sure if that is common at other races, but I thought it was a cool idea. At the end, Pioneer Park had a number of tables and tents set up for finishers, including a food tent that had water, bananas and pretzels. I missed the usual Minnesota race staples of salted nut rolls, Old Dutch potato chips and Great Harvest Bread, but this is a smaller race than some of the others I run (and it doesn’t cost as much either).

Overall, this is a nice race that I’d recommend for those interesting in the half marathon distance. Ryan reports they may tweak the course again next year to deal with the late hills, but I’m not sure how much of that can be done within the confines of Stillwater proper. I do like the Pioneer Park finish area and the walk back down the hill to the parking ramp wasn’t nearly as bad as I remembered. I think they also offered a free beer back at the Water Street Inn, but I’m just never going to be a beer drinker – especially after running a race. Many others will love this little touch, though.

As for my actual race performance, I knew I wasn’t going to break any records this time around. My “A” goal was simply to break two hours and my chip time was 1:56:26. Didn’t think to get my splits off the Garmin, but that averaged out to an 8:54 pace. Most of the early splits were decent – the only bad ones were during the hills. I was 181st out of 521 finishers and placed about in the middle of the pack for my age group. Fine by me.

Up next: State Fair Milk Run 5K (unless I pick up a summer race)