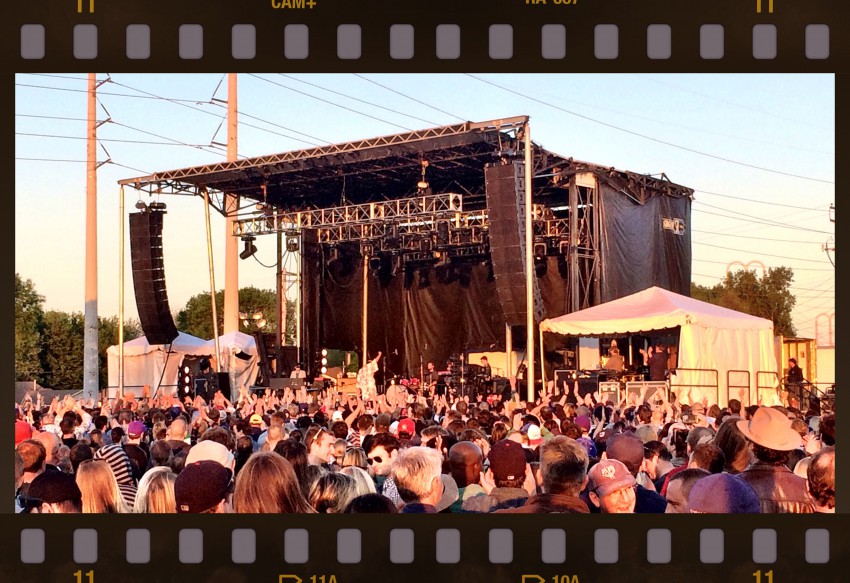 As a fan of history (and Minneapolis), I was excited when First Avenue announced that Father John Misty and Alabama Shakes would be playing a show at Historic Hall’s Island on May 30th. Then I was like – where the hell is Historic Hall’s Island? And why I have I never heard of it before now? Seems like everyone in town had pretty much the same reaction. But hey, I’m always up to try something new…

Turns out Hall’s Island isn’t really an island any longer – the east channel dried out and was filled in a while ago, but the the area has a really interesting back story. Named after Dr. Pearl M. Hall, the area that’s now between the Broadway and Plymouth bridges on the east side of the Mississippi was once home to public bathhouses and was slated to host a garbage incinerator at one point. Boom Island is just south of this area (also no longer an island), then comes Nicollet Island (which really is an island) and finally St. Anthony Falls. I also loved the story about the dead fly contest – way to be creative, Strib!

Initially, we thought it would be difficult to get there and find parking. Colleen pre-purchased parking in “lot four,” which was located two blocks over from the park, next to the Graco building on Marshall. We basically took I-94 to the Broadway exit, crossed the river, turned on Marshall and were right there. It was easy to get out too, but we took Hennepin back into downtown to grab some late food afterwards at Eli’s Food and Cocktails (first time there – it’s been on the list for a while due to their “best late night dining” awards).

The concert setup really only used half of the park – the area closest to the river was fenced off and the part being used was long and narrow. The stage was up front by Plymouth, with beer stands and food trucks on the sides and porta-potties in the back. The Minneapolis skyline made for a nice backdrop behind the stage and the sun was at our backs all afternoon. Doors were at 4:30 and I can’t remember now what the actual set times were for both acts, but Father John Misty played for just over an hour and the Alabama Shakes set was about 90 minutes (which included songs from both albums, but no Hold On – they didn’t even play that song at Paisley Park two nights later). The Riemenschneider review can be found here and the set list (also per Chris) can be found after the jump (along with a few photos).

We enjoyed the music, but everyone in our group wanted to leave before the encore due to the number of drunks near us. It didn’t bother me much (working in a casino does that to you), but the stands were obviously over-serving people that should’ve been cut off. Josh Tillman was a big hit with the girls, who thought he looked like Jesus with a great voice. Brittany Howard still brings it big time, but she didn’t even try to do that primal yell at the beginning of Don’t Wanna Fight that I was looking forward to all day. Bummer.

Overall, I thought it was nice outdoor venue, but Colleen didn’t care for it much. The Anchor food truck was awesome as usual and Travail even had a tent set up in back with a limited menu. The visit to the merch tent was quick and easy and I thought it was great that you could bring in one bottle of water (and a blanket to sit on if you found room for that). Oh, almost forgot – the sound system was really great for an outdoor venue (even on the sides). Nicely done, First Ave team, I’d come back here again…