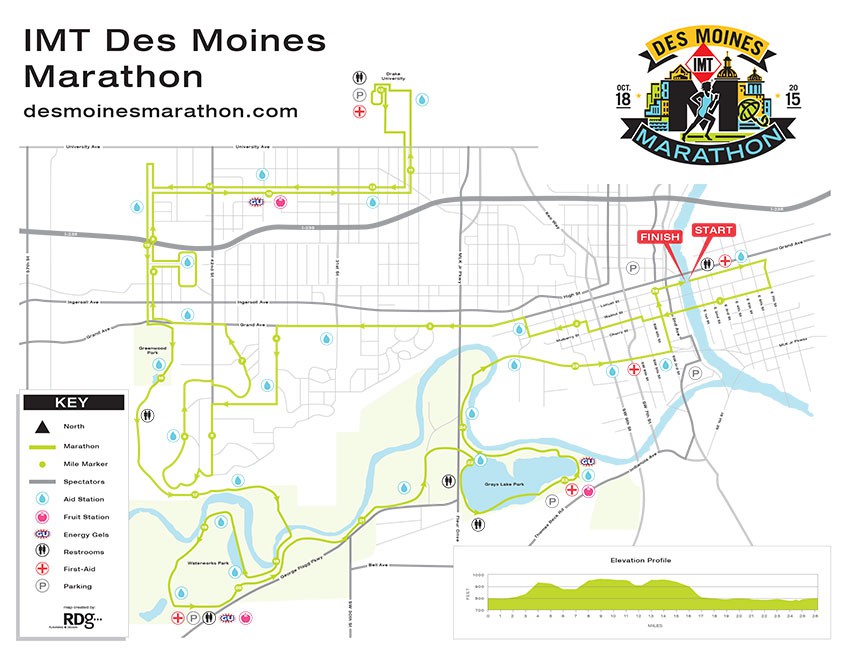 It’s been a few weeks since I signed up to run the 2015 IMT Des Moines Marathon and I really should come up with a formal training plan and get serious about running again. As my running log chart can attest, this has been a down year so far – less than 350 total miles in 2015 (and we’re already half done). Plus I now have the added pressure of a work colleague threatening to start a BQ challenge. Actually, that’s probably just what I need to get motivated again. Watch out, 3:25, I’m gunning for you again…

OK, maybe not. It would, however, be nice to PR on Sunday, October 18th. The race starts at 8am on the Locust Street Bridge in downtown Des Moines and has a course map that reminds me a little of Fargo (see above). There is roughly 150 feet of elevation change, though, so it’s not a completely flat course like one would expect to find in the great state of Iowa. Packet pickup is only open on Friday and Saturday, so I booked a room at the downtown Marriott on Saturday night. It’s close to the start/finish area and will have showers available afterwards, which sounded like a good plan.

Des Moines is a smaller race than I expected. Marathon weekend last year had about 9,000 total runners, which includes the marathon relay, half marathon and 5K events. Looks like they had just under 1600 marathon finishers, so it might seem a little more like Eau Claire than Fargo. I generally prefer larger races, but it will be interesting to see what I can do these days with fewer people on course.

Not sure what kind of training plan I’ll follow for this race – definitely need to pick up the mileage and continue cross-training. I still haven’t started my Wolverine workout plan due to travel/commute limitations, but I’d like to start adding in at least some of those new exercises. My weight is hovering a good 20 pounds higher than I want, but I’ve decided that I just don’t want to give up the things I like on the eating and drinking side of the equation. For now I’ll try the “increase workouts and practice restraint” method of weight control and see how that goes.