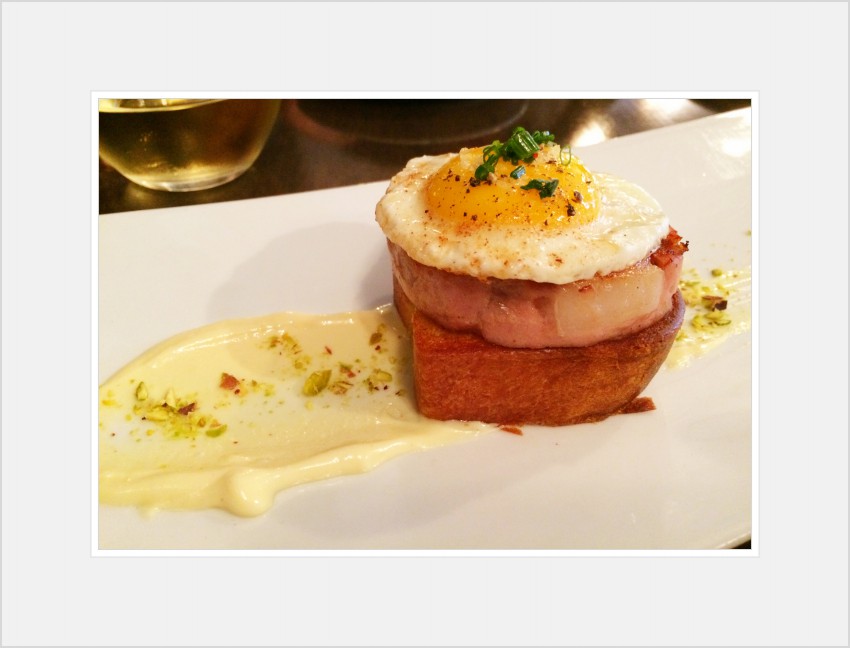 It was exactly a month ago, but I just realized this weekend I never wrote up anything for Colleen’s birthday dinner at Corner Table in Minneapolis. Chef Thomas Boemer had just returned from Aspen, where he won the coveted “King of Porc” title in the Grand Cochon competition (the piggy trophy was sitting right inside the door). This is a restaurant that was on the list for a long time. After they opened their sister place Revival, we decided it was time to finally visit.

Located at 4537 Nicollet Avenue South, Corner Table is just off the 46th Street exit on I-35W. There is a small lot next to the building and we managed to squeeze into the very last spot on the end. It was raining, so we made a dash for the door and got a table…in the corner. The room has doors that open towards a patio on the street, but everyone was inside because of the rain. It was nice to still have the doors open, but there were a number of unwanted flying visitors due to that.

The menu has a chef’s 5-course option ($65 food-only, $95 with wine pairings) or you can order individual items. We chose the latter, starting with the bologna sandwich with fried egg, brioche and mustard aÃ¯oli for me ($9) and the pork belly with chow chow and pepita oil for Colleen ($10). Both had reputations I had heard about and both were very good.

For the main course, Colleen ordered the halibut with kabayaki glaze, spring onions, braised radish and hon shimeji mushroom broth ($29). I had pappardelle pasta with lamb ragu and ramp pistou ($21), which was quite good. We had tickets to see My Morning Jacket that night, so we skipped desserts. Part of this also had to do with the speed (and quality) of service, which were just off all night. Our server was training someone and started off really well, but then they both just sort of disappeared for the rest of the night.

I really want to like Corner Table, but with so many other high-quality places in town right now, it will probably be a while before we get back there again…