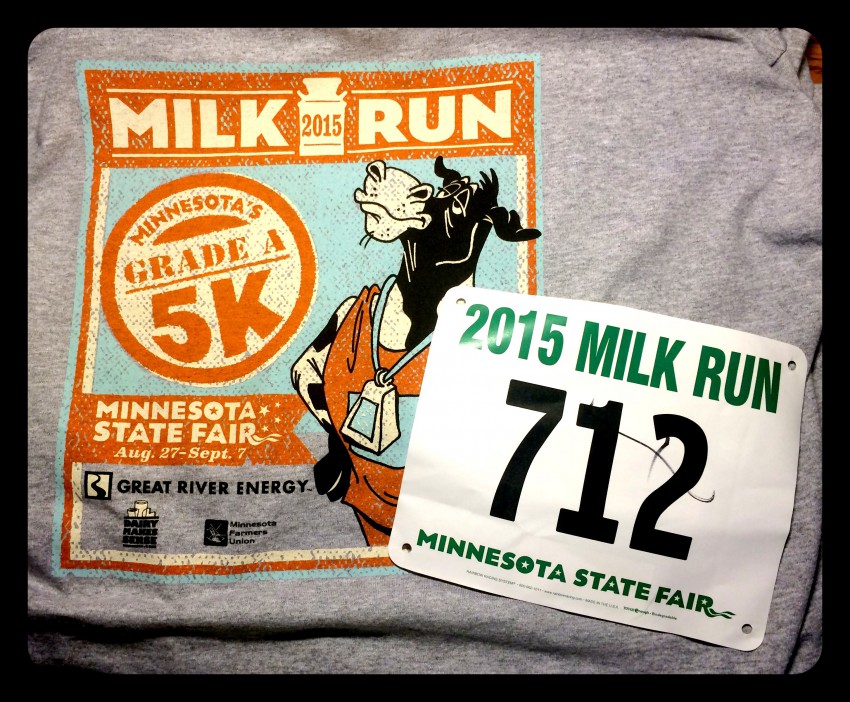 Wasn’t expecting much from my ninth straight running of the Minnesota State Fair Milk Run 5K – back issues prompted a three-week break from running in August, so the run log looks pretty thin. I even asked Kid Two if I could just run with her at whatever pace she wanted (Kid One has completely dropped the Milk Run Tradition™). But alas, I ended up trying to complete my quest for an age group ribbon anyways and came up short again. My official chip time was 24:48 (8:00 pace), with watch splits of 7:27, 8:31 and 7:50. This was 38 seconds slower than last year, but still good enough for 8th in my age group (out of 53) and 100th overall.

The top three ribbon winners still are flying, with the first place guy smoking almost everyone. Thomas Tisell, 48, of Saint Paul, ran an amazing 5:46 average pace to finish with a 17:55 (third overall). The important time to beat was the third place finisher (Piet Hansel, 46, also of Saint Paul), who had a chip time of 22:02. If I could just set a new PR for this distance, I would’ve had it this year. Oh well, still in the realm of possibility is enough to get me to keep coming back (and maybe even train a little).

One family member did set a PR this year – MK broke her old best time by nearly a minute (43:07 chip time). She too has declared that she’s done with this whole Milk Run business, however. There is one other runner that deserves some major props this year: Gloria Jansen of White Bear Lake set a new age group record that had held for 16 years. Her chip time of 25:00 gives her the fastest 5K time in Minnesota history for a 68-year-old woman. Way to go Gloria!

The course was changed again this year, with the start and finish line moved way over to Machinery Hill. The fair also decided to eliminate the option of paying for parking with an advanced purchase entry ticket, so managing traffic, finding a parking spot and getting to the starting line on time were extra stressful this year. The race organizers suggested entering at Snelling and Hoyt (which we did), but I think I’ll find an alternate way next year. We ended up with a spot near the West End entrance, but had to walk back to the starting line.

The new route basically added two new hills, one of which was right at the end (no fair, fair). I started out OK, but as usual, had trouble with that middle mile. Stopped at the midway water station (just like last year), which caused that ugly 8:31 middle split. Felt OK for the last mile, but it too was slower than I need for a ribbon. Kicked it in at the end to stay in front of this really short kid, but payed for it by nearly puking just beyond the finish line. Serves me right for sticking it to the kid, I guess.

We both picked up our shirts, got a chocolate milk from the Princess Kay crew, then headed back to the car to change. It was really weird starting the rest of our fair day on that end of the fairgrounds – all our past traditions involved starting by the old Heritage Square (RIP). Oh yeah, no door prizes yet again for either of us. WTH?

But enough with the complaining. This was my 46th straight year at the Great Minnesota Get-Together and I will always love it no matter what. In fact, we ended up staying for twelve hours Sunday and plan to go back Saturday for the Avett Brothers in the Grandstand and maybe again on Labor Day to see Merle Haggard, Kris Kristofferson and Sturgill Simpson.

Kid one is returning to work at the fair, but she is switching from the Corn Roast to the Taste of Midtown Global Market spot in the International Bazaar that is being split between Hot Indian Foods and The Rabbit Hole. Hot Indian had it the first half and their Tikka On-a-Stikka was the only new fair food I tried. Two pieces for $6, they described it as “chicken marinated in spices and yogurt, chargrilled and smothered in tikka sauce.” Colleen didn’t care for it, but I’d order it again for sure.

Our friends Thomas and Kat own The Rabbit Hole and we ran into them on Sunday (with their adorable daughter). They will be serving from the new spot September 2 through Labor Day with a mini menu of Kimchi ‘n’ Curry Poutine, Hot Tail and a Salad Named Soo (along with iced green tea). Can’t wait to stop back there and try it out.

As for other food, it was back to basics most of the day. Started with a Pronto Pup (of course, plus another one later), then 1919 root beer, cheese curds, corn roast, Danielson onion rings, Sweet Martha’s cookies and a frozen cider pop from Minnesota Apples. The free malt coupon from the Milk Run was again valid at the Dairy Building and I actually tried something other than plain vanilla – the new salted caramel puff flavor. The corn puffs were a little stale, but the flavor combination was genius.

We really seemed to walk all over during the course of the day. There were no birds in the poultry building this year due to the avian flu, but we did get to see some rather large horses. Our efforts to see the sheep, cows and pigs, however, were thwarted by an early 3pm barn closing time. We also missed all the shows in the Coliseum, but sat in there anyway, just to get away from the crowds and sit in front of the large fans. Speaking of crowds, it seemed jammed everywhere, but the official count for the day was “only” 179,724 – more than the last two years, but far from the all-time record set in 1994 of 209,969.

Let’s see, what else? Ye Old Mill is celebrating their 100th year of operation, so we of course had to go on that. We visited the Minnesota State Lottery booth again and purchased the $10 worth of tickets needed to get a “free” T-shirt. Colleen did the same and we won a grand total of $5 from our four tickets, so it was basically $15 for two shirts. Our friend’s band The Shiny Lights played a set on the new tpt stage outside the 4-H building at 6pm, which was the last thing we did before heading for the gates. Excellent job, Chris!