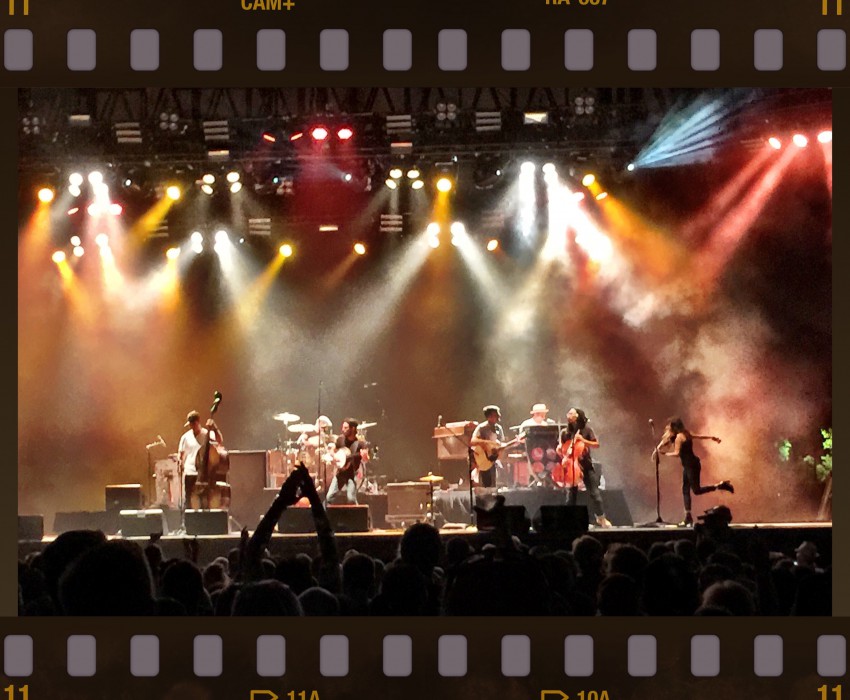 Our second visit to the 2015 Minnesota State Fair was Saturday, September 5th, and it turned out to be one of my best visits ever (and the first one was pretty damn good too). It was a day filled with food, friends, music and good weather. After the stressful parking situation for the Milk Run, we elected to take the free park and ride bus from Gloria Dei Lutheran Church in St. Paul and entered the grounds at the West End transit hub. We had intentionally skipped this area the first time, so I started at the Blue Barn for their new items:

I actually ordered the Cluck & Moo later in the day, but we did go to LuLu’s Public House in the morning to try the new Mac & Cheese Cupcake (mac & cheese nestled in a breadcrumb crust, then sprinkled with breadcrumbs and frosted with a dollop of Cheez Whiz) and our old favorite, mac and cheese on a stick. We also checked out the new semi-roof over the Schell’s Stage, which was a nice addition – too bad we missed Charlie Parr, Haley Bonar and the Cactus Blossoms.

After the West End, we hopped on the Skyride and headed over to see kid one at her new Rabbit Hole gig in the International Bazaar. That whole experience worked out great for her – they were super busy the whole time, the critics loved the entire menu and SK even got to do the plating for the TV interview Thomas did with Andrew Zimmern. Their poutine and hot tail were the only new items I really liked this year, but Thomas says he will be changing up the menu for next year (they’ve already been invited back and rumor has it fried chicken will be involved).

After that visit, it was non-stop friend meet-ups: the Skoglund family outside the education building (who also talked Colleen into finally doing the silk scarf thing), the entire Waugh family at the Go 96 booth, the New York contingent (Jennifer, Brandon and friends) by the honey stand and a mini Central High School reunion with the Shusters at the craft beer area in the Horticulture Building. Shortly after that, we also ran into Herm outside the Grandstand ramp – all the way from Las Vegas! That was a really fun surprise – nice to see his daughter and brother too (and meet his girlfriend).

Before the Avett Brothers show in the Grandstand, we stopped at the Star Tribune booth and got to chat with music critic Chris Riemenschneider, whom I’ve been a fan of for ages (but had never met). He had us run through a music trivia quiz, which we ended up winning with 9 out of 10 correct – good for a $25 gift card to Barely Brothers Records on Raymond in St. Paul. After that, we grabbed a few more Pronto Pups and some Fresh French Fries, which will always be classics in my book.

Attendance at the Avett show was only listed at 8529, but that included us, the Skoglunds and the Shusters (all in different spots). The opening group, the Preservation Hall Jazz Band, was super fun to watch. Trombonist Ronell Johnson was extremely animated and director Ben Jaffe played a mean tuba. I had never seen them before, but they have collaborated with a bunch of my favorites, including Blind Boys of Alabama, Tom Waits, Lenny Kravitz and the Edge.

The North Carolina Avetts have been on my bucket band list for a long time. Brothers Scott and Seth didn’t disappoint, playing with a lot of energy all night. I also enjoyed Joe Kwon on cello and Tania Elizabeth on violin. Both the Star Tribune review by Chris and the Pioneer Press article by Ron Hubbard (?!) were positive. Here is the set list (per Chris):

Bought the cool show print for $30, which was the end of my cash. Super-short fireworks show afterwards, then we perfectly timed our return bus back to St. Paul. I wanted to go back on Labor Day too for Sturgill Simpson, Kris Kristofferson and Merle Haggard, but we had already spent a ton of money on two very fun, very full days…