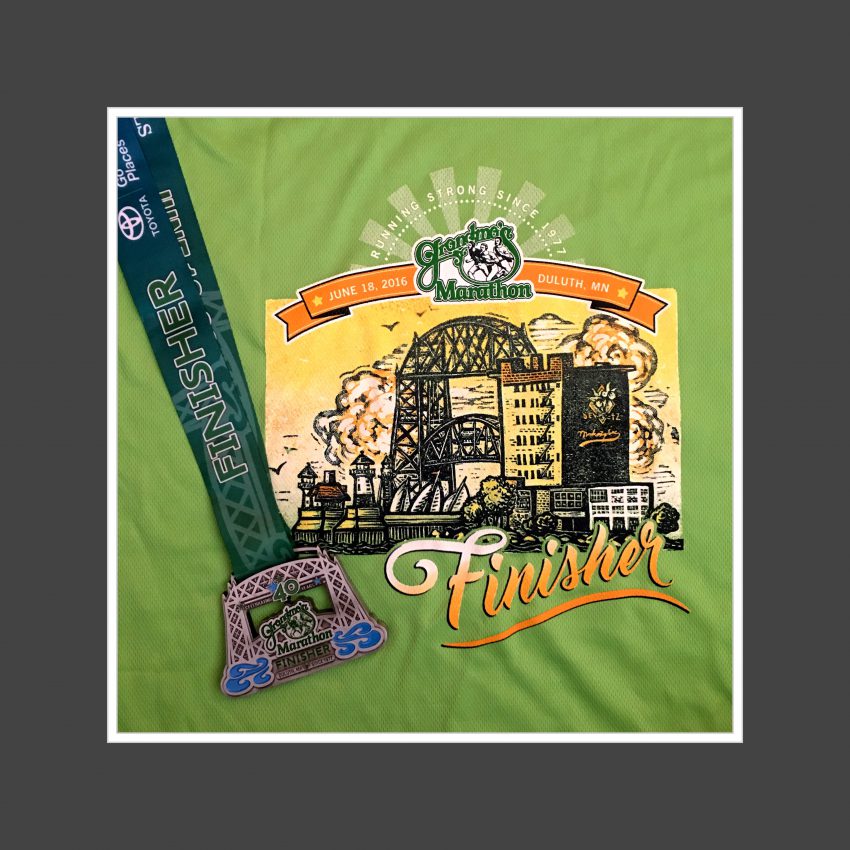 When the good people at Grandma’s Marathon announced plans for the 40th anniversary of the race, I perked up when they said runners who registered early would get a special jacket. When they published a picture of the medal, I signed up right away.

Lots of other people were apparently excited by this year too, with 9,100 runners selling out the race for the first time in quite a while. This was my eighth Grandma’s (and 26th marathon), but I hadn’t been up there to run since 2011. Love the race and how the city embraces the weekend, so I’m not sure why I waited so long to return again.

With my work schedule completely out of control right now, I was not nearly as prepared for this race as I would’ve liked to be. I did get in long runs of 17.5, 21.5 and 15 miles in the weeks leading up to the race, but there wasn’t much in the way of short weekday runs (or any cross-training or speed work). Add in my Garmin dying the week of the race and a forecast for hot and humid weather and my time expectations for this race went out the window.

My A, B, C and D goals were all very low-key: get an official finish under seven hours to get the damn medal, beat my worst Grandma’s time (5:26:54), keep it in the fours and, finally, try to beat my Des Moines time (4:37:23). Three out of four was pretty good on a day when the weather warning flags went from green to yellow to red to black as the day went on.

We stayed at my sister’s apartment again and I got dropped off downtown to catch the train to the start. I thought getting there at 4:50 was plenty of time, but the line to board was already down the street. Capacity must be way higher than it seems, though, as everyone in line before me only filled the front half of the train. Talked with three other runners on the way to Two Harbors, including a friendly woman from Colorado and a sixty-year-old gentleman who is a fan of the Galloway run-walk method.

We arrived at the starting line just before seven and I actually waited in line for a port-o-potty (which I think is a first for me). Maybe I missed it, but I don’t think they did the flyover before the start (which was always a highlight for me). Looked around a bit to see if I could find anybody I knew, but decided to head to the chute when it got crowded. No real announcement to start this year either – everyone just started moving slowly to the line and we were off.

Running without a Garmin was strangely liberating. I just wanted to take it slow and let my muscles take over instead of my brain. The only anxiety I had was due to the 4:15 pacer, who I traded places with twice. This race doesn’t have many clocks on course, so I knew I hit the halfway mark around 2:10. After that I had no idea until mile 25, but I knew I was going slower the second half because of walk breaks through each water stop to rehydrate, take on ice and sponges and pour water over my head (all tricks I learned the last time it was too hot).